close
At a loss for a hero … and any clear direction 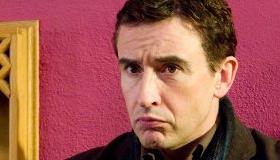 A rambling, self-serious and chronically unfocused look at ’80s-era small town America and the socio-psychological anguish of disaffected youth, What Goes Up looks to turn an already risky platform release into a certifiable box office belly flop. Producer/distributor 3 Kings Productions can, however, expect brisk business from filmgoers eager for an unfunny Steve Coogan and a dour Hillary Duff, with solid crossover potential among aging alcoholic clowns.

Produced and directed by Jonathan Glatzer—a minor television writer and theater veteran making his writing/directing debut— What Goes Up centers on a scrappy New York journalist named Campbell Babbitt (Steve Coogan), a talented hack suffering the devastating consequences of having permitted himself to get too close to one of his own stories. To decompress, his editor (Molly Price) sends him to the New Hampshire hometown of teacher-turned-astronaut Christa McAuliffe to report on the plucky common folk who’re presumed to be all-atwitter at the thought of a hometown girl going to space on the shuttle Challenger. What he finds instead, however, are a bunch of really screwed up kids (Hillary Duff, Josh Peck, Olivia Thirlby, Max Hoffman) less concerned with Christa and the Challenger than with how they’ll cope with a beloved teacher’s recent suicide.

Originally scripted by Glatzer and writing partner Robert Lawson as a play about the nature of heroism, What Goes Up falls into a particularly unfortunate class of independent films that are singularly responsible for needlessly swelling film festival submissions over the past 15 years; personal polemics so parochial in nature that they almost seem hostile to the notion of “story.” Bristling with ideas yet bereft of any thought as to how to communicate them, Glatzer and Lawson have created something that’s really less a movie than a kind of virtual couch trip for 40-somethings still screwed up about the 1986 Challenger disaster and whatever personal fallout they may still be carrying around with them. Given all that has transpired since that time—9/11, two wars, another shuttle disaster and a global financial collapse—one has to wonder how significant of an audience the filmmakers really expect to target. There’s certainly no appeal in the casting—Coogan is wooden and unfunny, while a very dressed-down Duff seems to have no real connection whatsoever to her character’s presumed angst.

The film’s lone attribute of note, ironically, is the one that most underscores its other deficiencies—former Faith No More keyboardist Roddy Bottum’s thoughtful score, a fantasia of the Thomas Newman variety that consistently punctuates the emotions the filmmakers and actors were unable to muster. It’s an ever-present reminder that nothing in the film is working as intended. But there’s another issue here as well—coming on the heels of the only slightly less disappointing Adventureland, another ’80s angst flashback, What Goes Up seems to shore up many of the criticisms leveled at that film as well, namely that the ’80s and the people who lived through them simply aren’t that interesting to those who didn’t. Here’s hoping more independent filmmakers get the message.