close
Existential crisis written into and between the lines 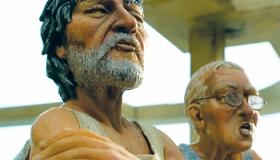 Tatia Rosenthal’s existentially themed drama $9.99 utilizes stop-motion animation to explore semi-fantastical ideas that couldn’t otherwise be touched on in live-action. This alone makes this expensive and time consuming method of production a worthy tool to bring to life the Etgar Keret short story upon which the film’s based. However, the film’s success rate is inconsistent, and while we watch the collection of struggling and interconnected characters suffer from their respective crises, the film as a whole suffers from a bit of the same confusion. Still, arthouse patrons and animation fans will be intrigued, and theatres involving (or inviting) local animation classes and animator societies for events could see rewards for carrying the title.

Walking by the local coffee shop, Jim Peck (Anthony LaPaglia) is given a gently spoken ultimatum from a mournful beggar: give him a dollar for a cup of coffee or the begger will kill himself. It’s a worthy hook that underlines the film’s central conceit: What’s the point? If we’re on the earth for a period of time to be determined, with a purpose to be determined, why all this sound and fury? Or rather, why not? Like the stop-motion medium (a fundamentally metaphysical medium on its own merits), this hook highlights the preciousness of the characters’ circumstances (and ours by extension), as well as addressing our seeming ignorance to said preciousness.

While Jim struggles with his fence sitting and the possibility that his middle-class fearfulness has resulted in the end of a marriage and unhappiness for his sons, his eldest works repossessing furniture and, in the process, falls in love with a model. Jim’s youngest can’t find a job that suits him (though he wins the affections of his family with his incredible cooking), and so buys a book for just under ten dollars (the titular $9.99 ) that promises to explain the purpose of life. Upstairs lives an older gentleman who’s never traveled for fear it’d betray the memory of his dead wife, a lovelorn man who can’t seem to grow up and a magician who’s behind on his debts. To each of these male characters happiness is something they see as a risk they can’t afford to take. While the men wallow in cowardly and self-indulgent doldrums, the women actively suffer in the pursuit of their related happinesses. Even the bedraggled, smoking angel that graces the poster art is a wallowing mourner.

As a philosophical pursuit the film feels somewhat thin, though the conceit is perfectly explicit. It is the kind of story that, after explaining the characters are spiritually wayward, implies it’ll offer some kind of explanation or answer to the overarching existential conundrum. Obviously, actually offering audiences the meaning of life is a pretty bad idea, whether it’s done in a film, a TV show or a reasonably priced book. The ending montage, which finds the characters discovering joy in precisely the activities that frightened them, speaks to the value of bravery in the story and skates the line of answer and question. And for what this film is trying to accomplish, this is a good tack indeed.