close
Both endearing and target marketed 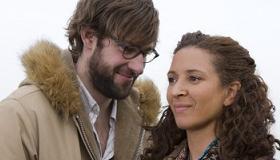 Director Sam Mendes takes a break from the emotional and visual rigors of Revolutionary Road and Jarhead for this wobbly odyssey into the hearts and minds of two barely-equipped, soon-to-be parents. But if this is Sam Mendes loosening his tie, then the film would have been better off under the guidance of star Maya Rudolph’s boyfriend, director Paul Thomas Anderson. Eventually Mendes does find his sweet spot, but by then it’s almost too late. Overall impression is that of a not-unrewarding trifle about a thirtysomething couple searching the country for place to put down roots. Despite some laughs, it won’t be funny enough for those seeking out that guy from The Office and the gal from Saturday Night Live. It should vaguely hit home with young marrieds. Focus Features should expect a notch-above-modest returns.

The journey of Burt and Verona (John Krasinski and Rudolph) ostensibly involves planes, trains and automobiles, but it’s really an interior travelogue around the serio-comic recesses of two anxious minds. In a fashion both stated and unstated, Burt and Verona feel like a couple of this moment: a cute, interracial pairing with enough remaining youth to be hip, yet also ready to fret about the irreversible onset of adulthood. Verona’s pregnancy is a welcome development except their freezing house, with its broken space heater and cardboard windows, screams for financial assistance. But a visit to Burt’s fizzy parents (Jeff Daniels and Catherine O’Hara) proves fruitless, as the blithely self-centered elders announce they’re renting out their house and moving to Belgium for two years. With Verona’s mom and dad having died years earlier, she and Burt decide to seize the opportunity to start over completely. They climb into his beaten down Volvo and hit the road, looking for a place for the two and their baby to start a new life.

The script for Away We Go was written by literary darling Dave Eggers and his wife Vendela Vida. Their time zone-spanning, episodic structure echoes Eggers’ You Shall Know Our Velocity!. However, Away starts bright and frothy and stays there beyond the limits of our interest. Burt and Verona’s first stop is Phoenix, where the city’s possibilities are in the hands of her former college roommate, Lily (Allison Janey), and her oddball husband (Jim Gaffigan). A crass and blowsy broad who talks ill of her children right in front of them, Lily is a feisty ball of middle-aged inappropriateness. Janney eats up the part, but she’s asked to play it a few degrees over the top. Yet fear not. As The Joker says in The Dark Knight, it’s all part of the plan. Because Burt and Verona aren’t really traveling the highways and rail lines of America, they’re falling down the rabbit hole; one that starts broadly comic then gets darker as the journey continues. After a detour to meet Verona’s sister Grace (a very nice Carmen Ejogo) establishes her relationship with her deceased parents, Verona and Burt head to Wisconsin for a run-in with his cousin, Ellen (Maggie Gyllenhaal). There are countless ways for parents to screw up their children and Ellen (who has shortened her name to LN) adds disproportionately to the list. A Women’s Studies professor who once breast-fed another woman’s child, Ellen is an insufferable Earth Mother and her child will surely suffer for it. Gyllenhaal largely stays above the role’s potential for outright silliness and Ellen teaches Burt and Verona the kind of parents they don’t want to be.

Mendes’ explorations of adult relationships have always been dark and observational, if not voyeuristic ( Revolutionary Road being Edward Albee-dark while American Beauty was dark satire). So it’s no surprise that as the film gets moodier and more difficult we feel it’s being more honest. It’s a turn that requires the two leads, both untested at this level, to sell both ends of the journey. And Krasinski and Rudolph’s solution is to not even try. They watch, absorb, learn and decide without histrionics or forehead-slapping. Their arguments, like her disinterest in actually marrying Burt, are those of adult characters not being asked to fight or break up to force the drama. Rudolph especially, who has never been all that impressive as a big screen actress, gives a wonderful turn that is certainly the best work of her career. Steering these subtle lead performances is Mendes’ most helpful contribution (along with the stately, beautifully composed shots of expert DP Ellen Kuras). So when Burt and Verona pull into Montreal and learn, in a riveting and bracing sequence, that the joys of parenting can also give cover to life’s tragedies, the movie finds its footing.

Like other films that try to tell a large group of people what they’re thinking, Away We Go overreaches in spots. The hipster soundtrack is too alt-rock. The details, while quite often spot-on, feel too demographically targeted. But there are still plenty of truthful moments. All about-to-be-parents wonder what their baby will look like, whether the mother’s boobs will hopelessly sag and if the kid will have an “epic kinda childhood”, as the goofy, optimistic Burt phrases it. The most important consideration is, naturally, giving the baby a proper home. When the film began, home meant where the refrigerator was located. But everyone, Burt and Verona especially, comes to learn that where they call home is less important than why they call it home.