close
A serio-comic debut not to be missed 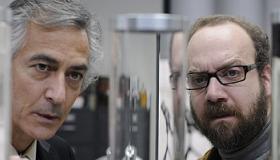 The catchall phrase “the dark night of the soul” takes on new meaning in visionary writer-director Sophie Barthes’s faux-Sci-fi/Fantasy/Comedy, Cold Souls. A perfect vehicle for the ever-entertaining and soulful Paul Giamatti, playing an anxious stage actor named “Paul Giamatti,” this delightful—if often dark—metaphysical film falls somewhere between early Woody Allen and Charlie Kaufman. (Think Sleeper crossed with Being John Malkovich or Eternal Sunshine of the Spotless Mind ). A hit at this year’s Sundance Film Festival (and one of this reviewer’s favorites), Cold Souls deserves more than an arthouse booking. The film could—and should—bust out all stops at the local multiplex.

The story finds Paul agonizing over his interpretation of a role in a production of Chekov’s Uncle Vanya. Desperate for a moment of relief from his existential angst, he reads a promising article in The New Yorker about the bliss of “soul extraction.” He heeds his agent’s advice and meets Dr. Flintstein (the affable David Strathairn), who assures him that “When you get rid of the soul, everything becomes more purposeful,” and that his consciousness will not be affected because he’ll “keep everything useful.”

However, once the procedure is complete, Paul feels “empty, light, bored, but overall . . . great.” His upbeat yet strangely coldhearted new temperament proves a definite disadvantage in Vanya, as well as in his personal life. When a friend says she doesn’t know what to do with her mother who’s on life support, Paul blithely suggests: “Why don’t you unplug her?” Well, “Soullessness has its peculiarities,” as Dr. Flintstein observes. He then proceeds to “rent” the soul of a Russian poet to Paul. Fine for Vanya, but, now haunted by dreamlike visions of the unknown Russian’s life, Paul wants his own soul returned. When they discover that his soul has been sold to a Russian actress—transported by a beautiful blond Russian soul-trafficking “mule” (Dina Korzun), Paul takes off on an alternately amusing and mysterious journey to St. Petersburg—in search of his soul.

The inspiration for Cold Souls, says Barthes, was a strange dream she had the night she finished reading Carl Jung’s Modern Man in Search of a Soul, which theorizes that modern man’s drama is his refusal to acknowledge the burden of his soul and his inability to live the totality of his being. In the dream, Barthes is standing in line at a doctor’s futuristic office. She, like everyone else, is holding a box containing her soul. Woody Allen, who is in front of her, becomes furious when he discovers that his soul is the size of a chickpea. The moment Barthes looks inside to check her own soul, she wakes up.

Born in France (although she’s lived throughout the world), Sophie Barthe’s roots lie in Ionesco and Beckett’s Theater of the Absurd and Surrealism. Her interest in philosophy, psychology and spirituality bleeds through in every scene. And the impressionistic camerawork and pastel lighting of Andrij Parekh's cinematography creates the perfect balance of melancholy and lyricism, akin to the palette and sensibility of Deborah Tuberville’s haunting vacant-home-scapes. The sparse score by Dickon Hinchliffe (a founding member of the UK band Tindersticks) beautifully underplays the film’s imagery.

Barthe’s potential as an imaginative and intellectual writer and a director with a distinctive visual style displays more than promise in Cold Souls, her debut feature, it exhibits a self-assurance and a brilliance and should not be missed. Although filled with amusing comedy and irony, the film raises disturbing questions about the “soul” of modern society and our place in it.