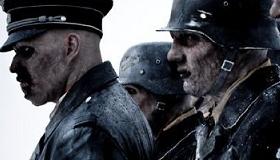 Dead Snow is an insufferably derivative horror movie of the Evil Dead meets George Romero school, with some Scream -era Wes Craven self-reflexivity tossed in for good measure. Splatterpunks may love this Norwegian (yes, Norwegian) gorefest, but then they’ll love anything if it has at least one hot girl in it (check) and at least one decapitated head (double check). Trust me, either this isn’t your kind of movie at all or you’ve seen everything here done better and with fewer metaphoric quotation marks hovering over it. You want a good foreign horror movie about resurrected dead people? Try Tak Sakaguchi’s rather pleasurable and very energetic Yorio: The Samurai Zombie. Yorio is good nasty fun with great action sequences, actual plot twists and smart, light-fingered cartoon violence—and it doesn’t reek of moldering genre body parts anywhere near as much as Dead Snow does. Expect a lower theatrical turnout and monetary reanimation come the DVD afterlife.

The plot of Dead Snow is basically Evil Dead Part I in the (beautifully photographed) snow. Sybarite youths sequestered in a remote cabin find a cursed box under floorboards. Soon they are attacked by destructive, resurrected homunculi: mayhem and red Caro Syrup ensue. It’s that basic, it’s that familiar and it’s more than that predictable. Even the inclusion of a yammering fanboy horror geek to riff on the established movie rules in such predicaments is a reference to a reference—post-modernism has never seemed so antique.

The one thing some will take for originality here—the zombies are Nazis this time—is already a conceit of at least one video game (“Call of Duty: World at War”) and arguably the basic premise of both 1960’s They Saved Hitler’s Brain and, more recently, the presidency of George W. Bush (okay I made that last part up). It’s not like the Nazis really behave like Nazis or anything—they just run around killing everything they can find like any other zombie would, except they’re wearing what actually look to be Luftwaffe helmets and occasionally brandishing bayonets.

It’s the year of the Nazi genre-buster—just ask Quentin T. and Peter Jackson (the latter allegedly working on a Nazi zombie project of his own). Still, considering how hard Germany kicked Norway’s ass in WWII and the current state of European democracy, Dead Snow is either sacrilege or a missed opportunity. Because in case you hadn’t noticed, the Anti-Immigrant and Nativist Right just swept the European elections across a wide swathe of countries, with proto-fascist parties making striking gains. What better time to ruminate on whether Nazis still walk among us? Recent evening newscasts are a lot scarier than Dead Snow could ever be.