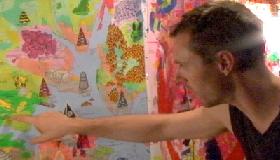 This Canadian doc about the micro-sphere of rock poster designers lurches along with just the right mix of discovery and dry-obsession that it has the potential to reach the hearts of its poster manic, indie band loving constituency. While financial prospects are as small scale as the posters, the potential of the film to reach the community it reflects is really high, particularly with forward thinking efforts on part of theater owners. If your town has an indie rock venue (and most do), consider a screening. All the alt community has to do is know and it’s unlikely they’ll miss it.

The first few minutes of Died Young doubles as its trailer. Sadly, it’s trailer is choppy and hard to follow. Since the film eventually finds its stride, one could imagine debut director Eileen Yaghoobian might be trying to mimic the poster community’s brand of cultural disorientation—but that might also be a touch convenient. We see artists in their studios (some more apportioned than others), in bars, posting signs on lamp posts, visiting dye shops, seemingly breaking into buildings in the middle of the night to do their work, and what registers most is the awareness there isn’t yet room for their trade in broader spheres: after decades making posters for bands who grow from guppies into whales these poster designers still remain undiscovered. A scene in which one of the designers is actively pushing his posters on a disinterested band manager in a parking lot infers that even the bands who benefit from what’s far too sophisticated to be called “fan art” aren’t even that hungry for it.

However often, the designer’s only pay is free shows and free beers. These artists sometimes never see fees for their labors and hand over their products to support the bands they love. It’s a poverty row operation that looks like a frequently functional, if cobbled-together, system of barter and mutual affection. If handmade, it exists and creates the necessary tension between Art and the Underground that most fringe movements enjoy—if you call what they do enjoying, that is.

Art seems to always be on death’s door, or at least well past its “sell by” date. The tenuous relationship certain mediums have with permanence makes it easy to declare things like “Art is dead,” but we all know there’s more to it than that—or rather, death should maybe have quotation marks around it. The universe of band poster art relies upon music in a strangely parallel way. Bands aren’t just advertised on these highly ornate posters, their identities are ascribed and explored but without direct dialogue with the bands—it’s the perspective of the artist that forms the tone of the poster and therefore that specific representation of the band. The posters thereafter transcend their use as alerts for shows and become what one designer calls “artifacts.”

It’s arguable that these posters, with their frequent and unsentimental obsession with death and old porn, rally around the culture’s fears and compulsions. Irony is a touch-and-go bedfellow, here. The snarky and retaliatory re-use of these images (think Jesus in an Elvis suit) are a simultaneous reclamation of and a rebellion against a history unknown to the people who designed the posters—but from a cultural landscape that moves so quickly it’s impossible anyone to find a firm place on which to stand. This said, it’s pretty logical to rehash the old. It’s as close to nostalgia for stability as we can get. A commentator in the film said this: “Culture is the stuff you shovel out of your window at the end of the night to keep from drowning you.” One presumes that these posters, often built of disregarded ideas and parts, are part of that detritus—that and so much else we might or might not actually need, but want terribly nonetheless.