close
A family plans a traditional funeral, an audience sits through a custom heavy drama 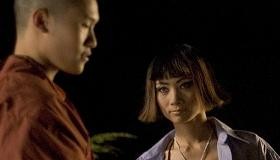 Anna Chi’s Dim Sum Funeral covers the same territory the more renowned Chinese helmer Wayne Wang has tread many times before (and tread better). The film is an overly melodramatic and soap operatic look at four estranged, westernized siblings who return home to honor their late mother’s wishes for a traditional Chinese funeral. Despite a game cast, this ho-hum dramedy won’t even be a blip on the box office meter in limited release, but may find a more receptive audience when it hits DVD shelves, which should be rather quickly.

Director Anna Chi’s personal transformation from prominent member of the Chinese Communist Party to American film director would make a better story than this very familiar and episodic look at a contemporary Chinese/American family thrown into mourning and the subsequent planning of a traditional funeral.

Brought together by their former Nanny, Viola (Talia Shire), the four siblings each have drama going on the front-burners, causing endless conflict as the story progresses. There’s Elizabeth (Julia Nickson), the eldest daughter, whose marriage is collapsing around her; Son Alexander (Russell Wong), a successful doctor who is cheating on his wife, a former Miss Taiwan (Kelly Hu); youngest daughter MeiMei (Steph Song) a lesbian and B grade film star who is emotionally explosive; and middle daughter Victoria (Francoise Vip) who also has big issues with mom. Added to the mix is Elizabeth’s white husband (Adrian Hough) who is desperately trying to save his marriage, MeiMei’s spirited lover DeDe (Ling Bai) and veteran Cheng Tseng, who is delightful as Mom’s oldest friend.

Over the course of this forced reunion everyone tries to come to terms with their past as they also must deal with rocky futures. Unfortunately Donald Martin’s pedantic scripting tends to go for the obvious and most of the actors end up playing stereotypical characters we’ve seen a hundred times in this kind of dysfunctional family dramedy. Song as MeiMei really goes overboard, chewing the scenery every chance she gets and grating on the nerves. As her girlfriend, Ling Bai is at least a bright light in the proceedings even if her character is completely one dimensional and a little silly. Veterans Shire and Nickson, never losing their dignity as everything seems to be collapsing around them.

Chi’s past production work with Wayne Wang in movies like Joy Luck Club and his most recent and moving film, A Thousand Years of Prayer, is obvious and she’s clearly following in his footsteps. Unfortunately the humanity so evident in Wang’s contemporary Chinese/American tales is lost amidst all the strife in this routine exercise.