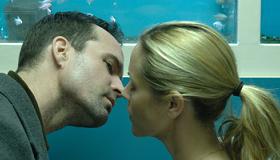 A sexual encounter that starts on the Internet spirals into kinky, perverse territory in this uncompromising but emotionally distancing look at a disturbed woman in total freefall.
Maria Bello’s courageous performance should find critical admiration but will not be enough for this spare and difficult drama to find much of an audience in its limited theatrical runs. Its underwhelming 2008 Sundance competition premiere led to many walkouts and this delayed theatrical release will probably be no different.

Downloading Nancy will polarize audiences—but still deserves attention for its audacious attitude in presenting the story of a woman, Nancy (Maria Bello), caught between a loveless marriage and her own severe lack of self-esteem. The film takes a cue from mainstream, Oscar-laden dramas ranging from Days Of Wine And Roses to Leaving Las Vegas, but goes much further into the depths of human despair than even those films did.

When her abusive, self-absorbed husband, Albert (Rufus Sewell), comes home one night and finds a note saying she has gone to see friends, it turns into a vigil of several days to see she is missing. Nancy has embarked on a dead-end affair with another wounded soul, Louis (Jason Patric), a man she met on the Internet and with whom she is now playing out a destructive affair designed to ultimately end in her death.

Despite repeated visits to her therapist (an empathetic Amy Brenneman), Nancy is whirring in an emotional downward spiral and only finds relief through self-mutilation. She and Louis play out a sadistic and painful relationship built on inflicting harm in mounting stages of intensity. As her husband seems increasingly concerned and equally clueless, we flashback to scenes from the marriage that caused her personal collapse. Clearly she lies to her husband, therapist and family while trying at least outwardly to seem like she’s in control, but it’s obvious she is deeply lost.

Director Johan Renck steers this downer drama into dark caves of human suffering and has elicited an extraordinarily stunning turn from Bello, playing a woman barely clinging onto any hope for a way out. It would be easy to write off Nancy’s predicament as an obvious mental illness, but in Bello’s hands we see this is a neglected human being who has finally given up. People caught up in similar relationships may identify with the complete defeatist attitude she displays, but Renck and writers Pamela Cuming and Lee Ross are determined to take this story into extreme regions of human behavior.

Both Patric and Sewell are well suited for their roles but play second fiddle to Bello, who singlehandedly makes this problematic movie worth seeing.