Ice Age: Dawn of the Dinosaurs 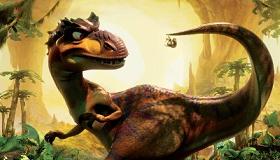 Just a few weeks after the box office meltdown of another comical, prehistoric, Summer blockbuster (I refer to Land Of The Lost ), we now get one that shows how it’s supposed to be done. Going to the well for the third time and adding tons more action and razor-sharp 3D, the Ice Age series proves it is far from extinct as it hits its stride with an irresistible and enormously fun third entry that earns dino-sized laughs and should again score big time at the box office and beyond.

Back with their now familiar peccadilloes, Manny (Ray Romano), Sid (John Leguizamo), Diego (Denis Leary), Ellie (Queen Latifah) and newcomer Buck (Simon Pegg) find themselves in the shadow of some scary dinosaur action when Sid, looking for some love and respect, decides to “adopt” three baby dinos who have just hatched. This of course causes ginormous problems with their very protective “real” mother as she takes the kids and Sid into dangerous territory. Soon the rest of the gang follows, even as their own problems take center stage. Ellie is pregnant, which means Manny (sweet, but not a multi-tasker) spends most days dealing with impending fatherhood while sabretooth tiger Diego has been emotionally defanged and is looking for a comeback. In addition to nervous-nelly Sid, Ellie’s possum kin, Eddie (Josh Peck) and Crash (Seann William Scott), are returnees from Ice Age The Meltdown. Joining everyone as they roam the valley of the dinos is an inspired new character, Buck, who is a sort of Errol Flynn pretender constantly having to outwit and outfight his main nemesis, a rather imposing white dinosaur. Voiced by British comedian Pegg, Buck is a wonderful addition to the tribe and a good bet to come back in future sequels—if there’s any justice at all.

This edition feels like it’s tripled the action quotient with one harrowing sequence after another (at least in ‘toon terms). The humor is as solid as always but no Ice Age has ever been quite this intense. The CGI animation from Blue Sky studios is, as always, top of the line and genuinely enhanced by strong 3D effects. In fact, unlike some other recent films, the 3D here has a purpose and is worth the extra bucks at the box office.

Beyond the jokes and the excitement, the Ice Age series will always be remembered for its engaging characters, which is led by droll Manny (voiced by Romano in the only decent movie part he’s ever had). Leguizamo turns Sid into a Zen-Jerry Lewis to amusing effect, while Leary once again steals the show as the conflicted and proud tiger, Diego. Latifah is a warm presence, while her possum brothers add to the fun. No Ice Age would be complete without the squirrel nutcase, Scrat (voiced by Exec Producer Chris Wedge) and here he makes a nice romantic “lead” in his own continuing storyline as he tries to find love with the improbable help of an old Lou Rawls soul song.

Kids are gonna love it all of course, but the good news is their parents may too. With Monsters Vs. Aliens and Up already proving there’s an endless appetite for blockbuster animation this year, this is another one for (all) the ‘Ages’.