close
Trading on imagination may only produce imaginary audiences 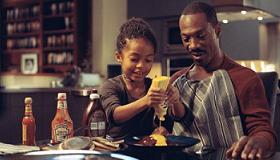 Amid the peaks and valleys of Eddie Murphy’s topsy-turvy career, Imagine That falls squarely in the unremarkable middle, an inoffensively formulaic family comedy designed to maximize mediocrity without taking any undue chances on originality. Assuming that fans of comparably uninspired Murphy fare like Daddy Day Care still have enough disposable income to actually go out to the movies, earnings should fall respectably north of last year’s disastrous Meet Dave, securing Murphy yet another lease on box office life.

Resurrecting a popular Hollywood motif in which hard-working dads come to grips with their deficiencies as parents ( Hook, Jingle All the Way, Liar, Liar etc.), Imagine That casts Murphy as Evan Danielson, a single dad and gifted investment whiz sparring with his firm’s hot new hire—an overbearing Native American named Johnny Whitefeather (Thomas Haden Church)—to ascend the company’s leadership when top dog Tom Stephens (Ronny Cox) retires. Unfortunately, that means he has neither time nor patience for his 7 year old daughter Olivia’s (Yara Shahidi) troublesome attachment to a security blanket, not to mention her gaggle of imaginary friends. But when Olivia’s mother (Nicole Ari Parker) asks Evan to take Olivia during a particularly busy week of her own, he has little choice but to find a way to strike a balance between the two—a balance that magically ends up tipping advantageously in his direction as he discerns that Olivia’s imaginary friends are both real and uncannily savvy about investing.

Former Bill & Ted screenwriters Ed Solomon and Chris Matheson—who haven’t authored a script together in more than 17 years—play this one strictly by the numbers, vacillating safely between kid-friendly slapstick and gentle sentimentality, and squeezing it all into a rhythmically predictable three-act script ready-made for story structure seminar dissection. That doesn’t leave Murphy much room to maneuver, putting added pressure on other cast members to keep things afloat. Fortunately, even when Murphy’s not on, Yara Shahidi is, bringing natural charm and infectious innocence to a story desperately in need of a credible, grounding presence. Almost as inspired is Haden Church’s Whitefeather, a self-centered blowhard of such epic proportions he literally steals every scene he’s in.

The odd man out here, ironically, is director Karey Kirkpatrick, an animation veteran ( Over the Hedge ) making his live-action directing debut in a film all but devoid of special effects. Given the conscious effort to leave the film’s imaginary characters and worlds strictly in the realm of the imagination—perhaps the one truly praiseworthy artistic choice in the entire picture—Kirkpatrick is a curious selection. To his credit, he doesn’t exactly bungle anything, but the spontaneity at which the best comedy directors excel, and which has typically been Murphy’s stock and trade, seems unduly stifled, like a hot potato no one on the production team wanted to handle.

Perhaps there’s some solace in knowing that studio risk-aversion has, in at least one case, not completely destroyed the product in question, but it should be tempered by concern regarding what appears to be a move toward mandated mediocrity at all studio levels. If the new definition of success is the mere absence of abject failure, Hollywood may soon find itself courting imaginary audiences.