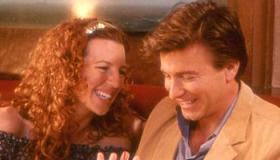 Irene in Time is a near-insufferable, low-budget, pity party that combines the occasional poignant insight with slack storytelling and a serviceable filmmaking technique that hasn’t improved over the course of writer/director Henry Jaglom’s long career. It’s a bit heavier than some of Jaglom’s previous films, but looks to perform commensurate with his other product. Its theatrical timing for Father’s Day should earn the movie an extra couple of bucks before heading into the DVD players of the over-50 crowd.

Someday, director Henry Jaglom will drop all the pretense and make a movie called Talking. Like his other pithily-titled dissections of female concerns, Eating, Going Shopping and Babyfever, it will be a semi-improvised wallow into the existential problems of troubled, contemporary women. But, as befitting the ultimate Henry Jaglom film, Talking will be a plot-starved compilation of middle-aged women sitting around a framed photo of Orson Welles and jabbering non-stop for 90 minutes about the existential problems of troubled, contemporary women. Until that day, Jaglom brings us Irene in Time.

Anyone familiar with Jaglom’s work will know what to expect: extended, barely-scripted scenes of women sitting around confessing their innermost feelings. This, of course, is better than extended, barely-scripted scenes of men sitting around confessing their innermost feelings, which would only result in movies about videogames and farting. But guys will surely find the consequences of their behavior embodied by the sad, misguided Irene (Tanna Frederick). A desperate and neurotic spinster, Irene has memorized the playbook of 21st century dating: she consumes dating self-help tomes, never mentions the M-word to guys and believes houseplants subconsciously transport men back to their hunter-gatherer roots. Irene’s relationship history is littered with unsuitable suitors, and Jaglom is attempting to explore why. The answer, to be picked and parsed with Jaglom’s standard scruffy banality, is that daughters are the sum of their father’s bad choices. Irene idolized her late father, and while the men tell tales of his exciting, high stakes exploits, the women see it differently. Irene’s father was gambler and a philanderer, but the young Irene knew nothing of dad’s questionable past. Her memories are happy ones, including being squirreled into nightclubs when she was nine and receiving presents purchased with his mysterious winnings. So for all her adult years, Irene has been pining for a man as “magical” as her father. But she’s the only one. Laying out his thesis with all obviousness, Jaglom surrounds Irene with friends negatively impacted by their abusive or absentee fathers. The most well adjusted, or maybe self-aware, is Irene’s lesbian friend whose dad is a pill-popper (as if really bad fathering leads to a total rejection of men).

Like many of the movies in Jaglom’s “love it or hate it” filmography, Irene in Time articulates the problem fine, but is not very good at solving it. What passes for a plot comes when Irene stumbles upon a music box containing a secret message written by dear old dad. The message sends her to Hollywood for a fateful meeting with lounge singer Helen (Andrea Marcovicci), who has a curious connection to Irene’s father. Helen, along with Irene’s mother (Victoria Tennant, quite good, considering), begins chipping away at the pedestal upon which Irene has always placed daddy. But at this point, Jaglom’s motives begin straying from his warm and flabby feminism. Indeed, Jaglom refuses to cut Irene a break. The bad boyfriends pile up and the less-than-flattering truth about her father inexplicably drives Irene closer to him. And to what end? Jaglom’s torturous treatment of Irene soon emerges as a self-congratulatory acknowledgement of men’s ability to consciously and subconsciously steer the course of other people’s lives. Irene in Time is the story of a tragic woman told by a man energized by his ability to be the architect of the tragedy. With its true main character having died before the movie started, and its female lead unable to break free from his influence, the film is not about Girl Power, it’s about Girl Powerlessness.

It also hurts that Jaglom’s unkempt visual aesthetic can’t give weight and momentum to the gears of the plot. And here, his off-handed anti-style is coupled with composer Harriet Schock’s dreadful collection of trite songs that stop time with every ridiculous or mawkish lyric. Yet with a revelatory lead performance, all this might have been easier to overlook. Frederick works hard and earns some measure of sympathy, but if she’s going to improve as a movie actress, she must escape the sway of Jaglom, who also directed her too broadly in Hollywood Dreams. However if there’s one thing we know about Henry Jaglom films, it’s that Henry Jaglom films are really about Henry Jaglom. And after 16 features, it’s time to admit the director has exhausted the possibilities of what his navel-gazing characters have to offer.