close
A story for tweens, filled with jokes for frat boys

Land of the Lost 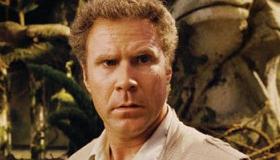 Land of the Lost amounts to a $100 million bet that Will Ferrell’s brand of sketch comedy can survive contact with the day-glo sludge Sid & Marty Krofft purveyed. And vice versa. His shtick induces a few chuckles and the special effects and production design are worthy, but the two sensibilities never gel, rendering the movie not quite funny, strange or exciting enough. Ferrell’s bank-ability will be tested. Those who fondly recall Land of the Lost ’s initial television run (1974-1977) may resist exposing their spawn to the ribald overlay. That leaves teens and laxly supervised pre-teens, so ka-ching! is still possible.

Evidently, screenwriters Chris Henchy and Dennis McNicholas were guided by the principle, “When in doubt, gross ‘em out.” Unsure whether audiences would be satisfied with straightforward if bizarre action-adventure escapades, they douse their funny guy with urine and send him through the alimentary canal of an ornery T-Rex. They don’t forget the boob and masturbation gags or the homophobic joshing. No doubt, “Captain Kirk’s nipple!” and similar exclamations are aimed at the spongy noggins of 12 year old lads. To the best of my recollection, however, sophomoric smut and potty humor wasn’t the Krofft’s thing. The puppeteer siblings favored a trippy mix of British pantomime and mildly counter-cultural psychedelia. At first glance, Ferrell may seem to fit naturally inside a body of work that gave key roles to Billy Barty ( Sigmund and the Sea Monsters ), Jack Wild ( H.R. Pufnstuf ) and Martha Raye ( The Bugaloos ). Yet there’s a genuine disconnect.

As dim-witted paleontologist Dr. Rick Marshall (Ferrell) breaches the space-time continuum, the boundaries between cinematic genres are also ruptured. On the other side of curtain lie ferocious dinosaurs, Sleestaks and plucky primates, meanwhile our idiot-savant guide is more interested in showing up Matt Lauer and extolling gluttony. The scattershot narrative doesn’t gain traction as a spoof of creature-features or as a celebration of the Krofft oeuvre partly because the target audience isn’t sufficiently familiar with what’s being halfway parodied and/or partially praised. They’ve only been taught to respond to the broadest, most obvious antics, hence Ferrell’s hiring.

In addition to the gross-outs and junior varsity frat house shenanigans, the main source of comedy is Marshall’s ignorance, a theme in Ferrell’s wheelhouse and consequently twirled ad nauseum. After being humiliated by Lauer on the Today show, this mind of misinformation gains vindication thanks to the efforts of pert British researcher Holly (Anna Friel), who believes in his scientific endeavors. Holly encourages Marshall to test the time-traveling gizmo he’s built so they go to a miniature wildlife theme park in the desert, owned by Danny McBride’s denim-encased redneck Will Stanton. Suddenly, the trio passes through a vortex, awakening in a place where dinosaurs run free and primates are nervous—where Viking Ships, Good Humor trucks and other flotsam from different eras have been randomly deposited.

Having Marshall’s gadget play the soundtrack from A Chorus Line may or may not be a parody of WALL-E, but it’s one of the funniest and silliest bits in the movie. In general, both the music choices and cues are on point. McBride, who proves adept at the relative dryness required of a second banana, gets one of the choicer quips concerning the location where ancient man might have hosted the Latin Grammys. The best scene, and arguably the most Krofft-like in spirit, has Marshall, Will and Chaka blissed out on a hallucinogenic beverage, lounging by a motel pool and munching on king crab.

A generous reading of Land of the Lost comes from highlighting its echoes of the Saturday matinees that once unspooled in now-extinct movie palaces—perhaps even going so far as to see it as a modern-day equivalent of a Crosby & Hope Road movie. Sadly, those pictures feel as if they were made in a parallel universe to the one in which Land of the Lost was conceived and executed. At least films made in the good old days weren’t so blatant about expressing the vision of marketing departments first and foremost. (The cross promotion between Universal and its corporate cousin, NBC’s Today show, is only the most glaring on-screen evidence). The bean counters could get the last laugh of course. And no matter how much their concept has been altered, we shouldn’t begrudge the Kroffts whatever pleasure and coin they derive from the revival of one of their properties. Will Ferrell might even become their new favorite, toppling Billy Barty.