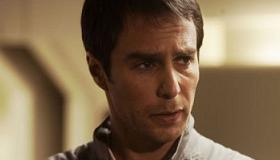 If there’s still an audience for old-school, ideas-driven allegorical science fiction, it will undoubtedly find much to cheer for and perhaps a bit to laugh at in first-time director Duncan Jones’ ambitious if slightly uneven debut Moon. Anchored by a dexterous performance from indie stalwart Sam Rockwell and shot in a lean, expressive and slightly surreal visual tone that recalls Tarkovsky’s Solaris, Moon harkens back to pre- Star Wars American science fiction films of the early to mid-70s—pictures like Westworld, Silent Running and Soylent Green that tried to extend the staggering creative and box office achievement of Kubrick’s 2001: A Space Odyssey into other topics and treatments. Like those earlier movies (and unlike Star Wars ), Moon is a drama of extrapolation rather than escapism—a rumination on the human race’s place in the cosmos as it is now or may be in the near future if trends in resource management and genetic engineering continue on their current course.

Sam Bell (Rockwell) is a space miner alone on the surface of the moon, an unquiet orb being plundered by a faceless corporation for “Helium 3,” a near limitless source of clean energy and trouble-free nuclear fission. Sam’s job is tedious and soul-wearying and his sole companion is a sort of benign Hal 9000 computer named Gerty who speaks just like Kevin Spacey and shows emotion (rather pithily) via the limited range of emoticons appearing on Gerty’s LCD “face.”

As Sam nears the end of his isolated three-year tour, he is rather alarmingly beginning to hallucinate companions for himself; distracted by one such dream, Sam accidentally collides with one of the enormous mining vehicles he was hired to tend and blacks out. When Sam wakes up, he’s suffering from partial amnesia, but he also seems leaner and fitter than before, and has had ominous new restrictions put on his movements by Gerty and his shadowy higher-ups. Is Gerty really what he seems to be? Is the mission? Is Sam himself?

In classic sci-fi movie fashion, the answer to all three questions is “No,” but don’t let that fool you into expecting a movie-movie in any sense of the term. There are doppelganger Sam Bells galore in Moon and even a well orchestrated if superfluous fistfight between two Sam Rockwells, but basically this is a slow, ruminative piece trafficking in classic genre verities that are at least as old as Mary Shelley’s Frankenstein or Karel Čapek’s R.U.R. —a philosophical reflection on the human condition, and the unexpected ways that technology alters and distorts how we define it.

As is so often the case with a promising first film, Moon ’s strengths are frequently also its weaknesses: Jones’ surreal visuals of gigantic mineral harvesters spewing moondust and inverted earths rising in fields of stars are lush bordering on portentous, and Nathan Parker’s script is weighty enough to recall both Tarkovsky and Kubrick but hasn’t got quite enough heft to make you forget Michael Keaton in Harold Ramis’s Multiplicity. But Sam Rockwell’s latest tour de force brings it all back home, providing a human core to an unlikely character in an outrageous but empathetic predicament, which, come to think of it, is as good a definition of a great actor or a quality fantasy film as we’re likely to get.