close
Not without its moments

My Life in Ruins 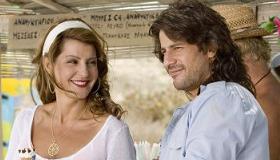 Seven years after My Big Fat Greek Wedding vaulted Nia Vardalos to momentary semi-stardom, the writer/actress is facing a crucial do-or-die moment. The dual failure of the television offshoot My Big Fat Greek Life and Vardalos’ 2004 acting/writing follow-up Connie and Carla has put added pressure on her back-to-back summer efforts this year: June’s similarly Greek-themed My Life in Ruins and July’s I Hate Valentine’s Day, which reunites Vardalos with Greek Wedding co-star John Corbett. Sadly, the weakness of the former—an amiable but deeply flawed romantic comedy unlikely to find much of an audience beyond a handful of Greek Wedding die-hards—may well end up casting an unavoidable shadow on the latter, regardless of its merits.

To be fair, Vardalos’ contribution to My Life in Ruins —as opposed to I Hate Valentine’s Day, which she also wrote and directed—is strictly thespian. Despite the Greek setting and the return involvement of Greek Wedding executive producers Tom Hanks and Rita Wilson, the key creative contributions here come from people with no connection to the previous film: director Donald Petrie ( Miss Congeniality and How to Lose a Guy in 10 Days ) and veteran television sitcom writer Mike Reiss ( The Simpsons Movie ). Petrie and Reiss are also pretty well disconnected from sure-footed storytelling as it takes the film the better part of its final hour to dig itself out of the nearly disastrous hole created by its first half hour.

The problems mount instantaneously as the audience is heinously force-fed mounds of pointless exposition, a crafty sitcom tactic designed to help even the dumbest of imbeciles follow along. Georgia (Vardalos) is an American expat—an ancient studies history professor to be exact—who’s skipped over to Greece on a whim, slumming it as a tour guide in hopes that she can help “educate” tourists on the finer points of Greek history and civilization. Unfortunately, her enthusiasm is shared neither by her boss (Bernice Stegers) nor her multinational tour groups, who really just want to have fun and buy trinkets. Her latest group proves one of the worst yet, a potpourri of stereotypes that includes a stuffed-shirt English family (Ian Ogilvy, Caroline Goodall, Sophie Stuckey), a slightly less stuffy pair of elderly Brits (Sheila Bernette, Ralph Nossek), two sexy Spanish divorcees (María Botto, María Adánez), a spunky and incomprehensible Australian couple (Simon Gleeson, Natalie O’Donnell), an annoying American couple (Harland Williams, Rachel Dratch) and even more annoying American student (Jareb Dauplaise) as well as a young and single American businessman (Brian Palermo) and an elderly American widower (Richard Dreyfuss). Even worse, Georgia must compete with a sister group led by Nico (Alistair McGowan), a slimy rogue who somehow manages to show her up at every turn. Oh, yeah. There’s also the group’s quiet, furry-faced bus driver, “Poupi” (Alexis Georgoulis), who just might be the kind of hunk who’d sweep Georgia off her uptight feet if only he’d shave and let her see that classic Greco-Roman jaw line.

Films of this sort are fairly formulaic— City Slickers being one of the more noteworthy examples—in that they tend to rise or fall on whether the metaphorical “journey” succeeds in actually being a life-changing one for those involved. That success is elusive for quite a long time here, as Reiss seems more concerned with extracting bad jokes from obvious stereotypes and tired fish-out-of-water scenarios. Once those gags run out, however, the film slowly drags itself back on track, finding just enough traction in a handful of earnest moments—all involving Richard Dreyfuss—to help audiences forget how awful it had been at the start.

It’s no coincidence that Georgoulis is the one stabilizing factor here—he’s the only actor whose performance feels natural and unforced throughout. But Dreyfuss—once he’s no longer asked to play the obnoxious geezer—ends up the film’s heart and soul, anchoring a key “oracle” moment that quite nearly redeems the entire effort all by itself. As for Vardalos, the jury is still out—despite a strong screen presence she’s neither a strong leading lady nor a strong comedienne. It’s a conundrum that doesn’t create insurmountable narrative problems, but it does necessitate a very particular type of story to showcase her talents—the kind of story which My Life in Ruins aims to be, but never quite gets right. It averts disaster at the very last minute, but not without some potentially serious nicks and cuts. Only time will tell whether those cuts will heal or lead to terminal infection.