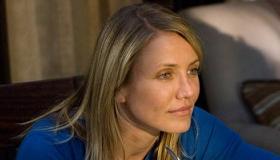 With money no object during Hollywood’s summertime snake oil sell-a-thon, filmmakers have mastered amazing feats of engineering to provide you, the viewer, with unprecedented levels of realism. But putting aside Autobots and starships, the one feat of engineering that goes underappreciated during beach season is the mid-budget, girlie-girl, 5-hankie drama. This is because summer is when guys get their nerd on. Women are an afterthought. My Sister’s Keeper is a femme-targeted cry-a-thon. And while that usually means a bruising round of manipulative pap, My Sister’s Keeper is a rare tearjerker where the viewer doesn’t feel jerked around (most of the time). And that’s a special effect that all the wizards at ILM can’t create. This story of a brave teenager’s final battle with leukemia and its effect on her family is meant to be savvy counterprogramming against Transformers 2. But a cancer weepie is a way heavier proposition than a lost-love weepie, so look for returns less stellar than director Nick Cassavetes’ last E-ticket ride to 5-hankie Heaven, The Notebook.

This mild summer surprise is based on the novel by Jodi Picoult, and if Cassavetes and Jeremy Leven’s adaptation has any fault it’s porting over too many intriguing avenues for the movie to properly explore. Teenager Kate Fitzgerald (Sofia Vassilieva) has leukemia. She contracted the illness at a young age. So young in fact that parents Sara and Brian (Cameron Diaz and Jason Patric) used in vitro fertilization to conceive Anna (Abigail Breslin) for the sole purpose of providing cord blood, lymphocytes, bone marrow and other bodily whatnots to keep Kate alive. And, as Kate’s genetic match, she has dutifully done so for 11 years, until Kate needs a kidney and the family turns to Anna. The pre-teen, however, is tired of the painful medical procedures and drug cocktails. So she hires attorney Campbell Alexander (Alec Baldwin), he of the billboards and TV commercials, to help her win medical emancipation, meaning her parents can no longer force her to assist Kate. It’s a provocative setup, but it accounts for most of what doesn’t work about the movie. If Anna were really suing her own mother, there’d be a heck of a lot more tension in the Fitzgerald household. And the emancipation thread predictably culminates in the type of courtroom scene that only happens in movies. But this is not a courtroom drama (although the judicial scenes are greatly enhanced by a terrific Joan Cusack, stern yet sympathetic in a small role). Kate is clearly and slowing dying and each family member is going to have to figure out how to accept it and process it. But Sara can’t and the family risks being damaged by her treatment of Kate, which gets more ferocious as Kate’s condition gets more hopeless. While not the obvious choice for the role, a deglammed Diaz makes a good Sara, whose single-mindedness could have become psychotic in the hands of a strictly dramatic actress. Since the story is told from multiple viewpoints, with each character introducing themselves with their own voice over, everyone gets their angle explored. The Fitzgerald men, of course, get the shortest shrift. Firefighter Brian and only son Jesse (Evan Ellingson) aren’t plumbed with the same depth as the female characters. But that’s acceptable, not only because Jesse is designed to be the forgotten son, but because most of America’s men will be sitting in the next auditorium watching Transformers 2. But the Fitzgerald women ably carry the day. Breslin plays Anna as strong, but not preternaturally or precociously so, while Vassilieva is simply fearless. She’s put through the medical-drama ringer (there’s plenty of vomiting and nosebleeds) but never asks for the audience’s pity. And her brief romance with fellow cancer patient Taylor (Thomas Dekker) gives her, and the audience, some romantic moments so the movie isn’t a 108-minute death march.

As the director of The Notebook, Cassavetes is no tourist in this town. But he’s got plenty of thematic plates to juggle and some rise higher than others. He’s fairly tough on these women, without being cruel or letting things slip into utter shamelessness. Also, when not assaulting our ears with the pushy and lame songs, he’s comfortable with quiet. With her days numbered, Kate must drink in moments normally taken for granted and Cassavetes gives her those moments, like when Brian liberates his dying daughter from the hospital for a day at the beach.

Some will say that emphasizing the ethical and moral questions surrounding “designer babies” would have resulted in a more interesting movie. And that’s probably true. But My Sister’s Keeper is not a think piece, so let’s be glad that any thinking is involved at all. The movie is really about emancipation, and not just Anna’s quest for medical emancipation. Everyone in the Fitzgerald family needs to be released. And there’s only one way that can happen.