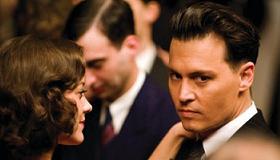 With a suave Johnny Depp making a rare appearance as an actor in a role rather than a piece of décor, there is definitely going to be a measurable constituency for Public Enemies, Michael Mann’s frequently taut but ultimately unsatisfying new gangster picture. One person who shouldn’t be cheering though (unless he has profit participation) is Bryan Burrough, whose revisionist history of the Depression-era gangster Mann based his film on. For there were two things that made Burrough’s book a radical departure from previous compendiums of gangster lore. One was an adamant refusal to glamorize stick-up men and kidnappers as much more than nihilistic thugs. The other was Burrough’s revelatory and convincing demonstration that the ’30s underworld was not populated by thrill-seeking existential anti-heroes (as so many movies would have it), but rather a seething Diaspora of inter-related and frequently improvised alliances, with the Barker, Karpis, Barrow, Nelson and Dillinger gangs all breaking apart and recombining under the pressure of federal manhunts like so many interchangeable parts.

Mann has pretty much chucked both of those insights and made instead something we’ve had at least three times before: a Dillinger picture, and one that like so many of Mann’s movies alternates between movie-movie silliness and aesthetic brilliance not just scene to scene but almost line by line. For if Mann is intermittently one of our best filmmakers, he’s also consistently one of our most contradictory—stylish and ham-fisted, audacious and cliché-driven, and torn between wanting to be an auteurist cineaste and having the crassest kind of mainstream success. Much of the violence in Public Enemies is vigorous but workmanlike, and punctuated by a handful of amazing set pieces—the opening jailbreak, say, or Mann’s exceptionally factual and fluid recreation of the FBI’s Little Bohemia catastrophe, where a carload of civilians was shot up by overeager federal gunfire as Dillinger and Babyface Nelson ran for their lives through the rural night.

There is no contemporary director, including Martin Scorsese, who understands the tropes of the crime film more intuitively than Mann; Public Enemies is like a Strunk and White grammar manual on the form and its themes, and this means that unlike Burroughs’ book, the film traffics in glamorization and existential anti-heroics almost exclusively. And that’s fine, because movies and books are different mediums, but it would be even better if Mann had more to add to the canon then his characteristic crisp editing and stunning sound design, or the fleet and versatile cinematography of frequent collaborator Dante Spinotti—all technical excellences, but unable to fully mask the shopworn conceits that give such an irregular beat to this movie’s heart.

Maybe it’s Depp that undoes things - a likable actor striving here to be loved, and no more virile with a machine gun in his hand then he was wearing a fright wig and scissors. I find myself panning two Depp performances in a row by saying this, which is odd to me because I genuinely like him as a performer, even if he is far more the heir to the Marlon Brando who wore self-designed pig make-up as an industrialist in The Formula than he is to iconic Brando primitives like Stanley Kowalski and Terry Malloy. I like Jackie Chan too, but that doesn’t mean I’d want to see him play Al Capone. And for all his statuary handsomeness and his high Cherokee cheekbones, Depp is, like Chan, instinctively a comedian—not a Cagney, but a more eccentric Cary Grant, and just as likely as Grant was to be miscast because he draws at the box office and just looks so damn much like a leading man.

Depp has his moments, especially in the softer and more reflective passages of the film. There’s a wry and wholly invented scene of Dillinger sneaking into the squadroom of the Chicago P.D.’s Dillinger Squad, where, as Dillinger counts up his dead friends and the oblivious men tasked with killing him listen to a ballgame, Depp achieves a wordless wistful grace. Mann makes absolutely brilliant use of Manhattan Melodrama, the Clark Gable gangster movie Dillinger watched just before he died, using elliptical editing to create a kind of Greek chorus of outlaw longing, loss and acceptance out of the found footage on the Biograph Theatre’s screen, while Depp mirrors each emotion with just the subtlest shifts of eye and face.

As he did in Heat and Manhunter, Mann gives special weight to the relationship between the crook and the cop who’s following him, and so it’s useful to measure Depp against Christian Bale’s more limited screen time as FBI agent Melvin Purvis, the Inspector Javert to Depp’s Jean Valjean. For my money, Bale never hits a wrong note—he is brisk, vulnerable, decisive and overwhelmed, all by turns, and we are left intrigued by the suggestion in his tight smile that there are aspects of Purvis he can’t give to us, because so much of this man’s inner life is to himself unknown. Purvis is the soulless company man Public Enemies sees as an emblem of the conformist forces that always crush the free spirit Depp’s Dillinger is thought to be. But Bale seems to have slipped that geriatric formulation a Mickey Finn by giving Purvis a soul anyhow, even if it’s on the sly.

Would that the same could be said about Marion Cotillard’s very sanitized Billie Frechette, a ghostly vapor of a character despite the inordinate screen time devoted to the Frechette/Dillinger romance. Mann was probably obliged by market realities to squander so much running time on a relationship that is essentially static and fully established the first time Dillinger and Frechette make eyes at each other—somewhere in the bowels of Universal Studios there just has to be a memo from Ron Meyer to Michael Mann saying, when it comes to female audiences, guns don’t “test.” But Mann’s vision of the world is masculine to the core, and he compounds his fundamental disinterest in Frechette by making her into a bizarre amalgam of ’30s clichés about female dependence and the feminist clichés that replaced them. This leaves Cotillard’s Billie with little to do but resist Dillinger for a few lines when he takes her for granted, and then tumble into his arms the minute he avows commitment and says something nice. Mann only really seems comfortable with Billie when she’s being tortured for information by a villainous fed; the rest of the time, it’s enough for Dillinger to yearn for her, or for Cotillard and Depp to make goo-goo eyes.

Well, here are a couple of things we know about the actual people these two love struck high school kids are being made to represent. Billie was already firmly implanted in the outer margins of the criminal class by the time she met Dillinger. She had danced professionally in nudie clubs, likely taken various lovers and impulsively married a third-rate hoodlum boyfriend named Wellington Spark the night before he was taken away to Leavenworth to serve time for mugging a mailman—exactly the kind of mundane bush league hold-up that set Dillinger on the path to big time criminality in his earlier, less ambitious days. In other words, the historical Billie represents a far more tragic and complex vision of fringe life during the Depression era than Mann’s movie ever gets near. For if Billie went astray because she was blinded by love, it was something other than Dillinger’s smile that poked her eyes out.

Dillinger was a charming psychopath who killed easily and liked risk. He reveled in his notoriety and even played to it where he could, something Public Enemies flirts with as required but ultimately never does more than display. He is also alleged by some to have had an enormous penis, which is folklore most likely, but of an interesting caste the still-chaste world of American cinema is unlikely to pursue.

There have been a minimum of three previous screen Dillingers, and if we imagine each of them as carrying around Dillinger’s mythical endowment, here’s what could be said of them: Lawrence Tierney, the 1945 original, played Dillinger as if he wanted to beat you to death with it. Warren Oates, the rambunctious Dillinger of John Milius’ 1973 do-over, performed as if the phallus was packing him. Mark Harmon, the TV movie gangster of 1991, was a Dillinger who had misplaced it and seemed relieved by that fact. And Johnny Depp? He’s a Dillinger who would apologize before taking it out, and then ask his lover to let him know if he’s hurting her so he can behave more tenderly. He should be a big hit with “the ladies.” But just where on earth do they keep “the ladies” nowadays?