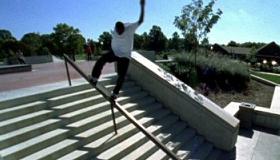 It’s no Lords Of Dogtown but Street Dreams, a Midwestern-set teens-on-wheels flick, is not without its own charms. Those charms, however, aren’t enough to make this a must-see for anyone whose transportation isn’t a skateboard. The ‘R’ rating isn’t going to help either. Focusing on Derrick, a talented boarder who defies his parents, the cops and just about everyone else in his way to becoming a winner in the sport of his dreams, this modest independently made and distributed film won’t make a dent at the summer box office but should find a niche afterlife on DVD and cable.

MTV star and skateboarding pro Rob Dyrdek co-wrote (with Elisa Delson and Nino Scalia) this spirited if familiar story about 17 year old Mexican-American Derreck (Paul Rodriguez Jr.), who is determined to hit the pro skateboarding circuit even without the support of his father (Yancey Arias) and stuck-up girlfriend (Jordan Valacich). His buddies Troy (played by Dyrdek), Cash (Ryan Dunn), Reese (Compton Ass Terry) and Mikey (Adam Wylie) egg him on—until he’s arrested for vandalizing the University stair rails, causing a major rift with his parents. He and the boys then take off for a big amateur contest in Tampa where he also has to deal with Troy’s increasing envy as a major challenge in the finals.

Rodriguez Jr. (son of the comedian) anchors the film nicely and is a solid pro skater himself, as is Dyrdek who brings a nice sense of street toughness to Troy and the rivalry with his good friend. Stealing the show though is the fat boy of the pack, Dunn, who gets most of the good comic moments and plays it all like a junior Jack Black. The fact that actors who are really pro boarders populate the film is a plus with debuting director Chris Zamascianyk pulling decent performances out of them in between the skateboard antics. Veteran child actor Wylie is all-pro in his scenes, as is the intriguingly named Compton Ass Terry who provides some welcome African American diversity to the group. Also impressive is ace real life champ Ryan Sheckler as another contender Derreck meets along the way.

The film was clearly shot on a budget (in Tampa, L.A. and Ohio) but manages to look sharp considering it was done on the quick. As you might imagine, with so many pros in charge the skateboard action, particularly in the big Tampa sequences, is first-rate and fun to watch but still there is the gnawing feeling that some of the budget was saved in lieu of more spectacular stunts, the kind that made the aforementioned Lords Of Dogtown (both real and reel versions) so entertaining.