close
A decade and a half later, Jennifer Lynch still holds sway in the areas of the odd 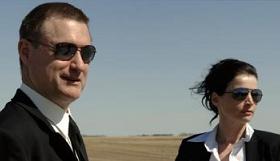 It’s been sixteen years between movies but with her latest weird and edgy thriller, director Jennifer Lynch proves she hasn’t lost the surrealistic eye she exhibited in her first feature, 1993’s Boxing Helena. With a plot revolving around a police investigation into a series of brutal murders and the wildly divergent eyewitness accounts of a rouge cop, whacked-out junkie and an 8 year old girl, Surveillance is one of those movies that twists and turns in unexpected and not always logical ways. Fans of the director and her father, David Lynch (who serves as Executive Producer), will eat it up, but for most audiences it’s definitely an acquired taste. Expect some fast cash from a limited theatrical release followed by bountiful returns from a quick turnaround to DVD.

The basic setup, although quirky, does not lead us to suspect we are about to enter the incoherent territory of these Lynchian enterprises. Two federal officers, Elizabeth Anderson (Julia Ormond) and Sam Hallaway (Bill Pullman), arrive at a sheriff’s office to investigate a particularly gruesome set of roadside murders. They’re immediately perplexed by the differing accounts of odd eyewitnesses, including an overly zealous officer (co-writer Kent Harper), a junkie named Bobbi (Pell James) and a pigtailed young girl, Stephanie (Ryan Simpkins), who’s family was recently slain.

The fun of this picture, which at times resembles Oliver Stone’s Natural Born Killers, is the zig-zagging use of real time to create a puzzle of a mystery, one that, until the final third, is shot in the style of a sizzling hot detective thriller. A big twist near the end pretty much destroys all credibility but brings with it the kind of kinky sequences we normally expect from the Lynch clan. Whether the audience is willing to go along will be the test of success for this intriguing, low-budget flick.

Performances are outstanding across the board, with Pullman creating a uniquely individual investigator demonstrating strange work habits. Ormond handles her tricky role with aplomb and James is terrific as a rather unpredictable witness to terror. As her druggie cohort Johnny, Mac Miller is appropriately slimy, while Simpkins as young Stephanie brings a truly haunted quality to her performance. As her mother, SNL’s Cheri Oteri effectively goes dramatic. Harper is super as the high-strung cop whose partner French Stewart is every bit as outrageous. There’s also good work from Michael Ironside as the police captain who puts the whole case in motion.

Lynch’s decade and a half absence from feature directing doesn’t show and although some of her film is grossly uneven, she pulls off several stunning set pieces and knows her way around this kind of thing as well as anybody—even dear old dad. He must be bursting with pride that she inherited his talent for the bizarre.