close
Coppola's newest is aesthetically personal, if not as narratively personal 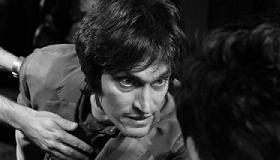 Francis Ford Coppola's second film this decade is an arthouse gem starring Vincent Gallo as Tetro, the eldest of two brothers wrestling with their estranged father's legacy in Buenos Aires. Coppola's name can still draw in fans, first those willing to give him a second chance after 2007's decorative and empty Youth Without Youth, with more later to come once solid word of mouth spreads.

Tetro embraces what is hazily dubbed "European" cinema—a tradition comfortable with inflating a small story with rich symbolism and emotion. Shot in the luxe black and white of a diamond commercial, the film first introduces us to Bennie (Alden Ehrenreich), an 18 year old innocent literally right off the port. (His cruise ship, where he works as something less than a waiter, has docked due to technical difficulties.) Bennie seizes the moment to reconnect with his much older brother Angelo (Gallo), a crank who has rechristened himself "Tetro" and taken a sweet and nurturing therapist named Miranda (Maribel Verdú) as his common law wife.

We know that their reunion is going to change all of their lives—and not just because when Bennie first sets foot in their neighborhood he steps over a fallen banner that blares "Wind Sweeps the Road. You Can Not Go Back." Privately, Bennie cries over the last letter Tetro wrote him when he ran away from their abusive father Carlo (Klaus Maria Brandauer), which promised emptily to return and rescue his younger brother. Meanwhile, Gallo is introduced with the gloom of a Grimm's fairy tale: minutes before we finally see him, he lurks like a beast behind a glass-paned door.

Coppola extends a timeless magic to the film, which is perfectly set in the cobblestone metropolis of Buenos Aires. People dress classically, meet at cafes and send telegrams. They love the theater, packing in for a burlesque adaptation of Faust and broadcast a play festival as though it's the glitziest thing since the Oscars. The biggest star in the country is a literature critic; the biggest in the world is a symphony conductor. When a character finally breaks out a cell phone, it's startling.

At his heart, Coppola has written an old-fashioned family gothic. The secrets at the center pack a near-primitive power, even though they're as foreshadowed as the family's continual way of throwing themselves into oncoming traffic. Surprises are few. But I succumbed willingly to the way Coppola handles his material, first showing us flashbacks in bright color, and then escalating the fantasy by turning memory literally into opera and ballet until grand art fights with colorless reality for dominance. In this film, the whole world is a stage, a soap opera grounded by the fantastic, naturalistic cast who show us real people deciding when to fight fate and when to collapse.