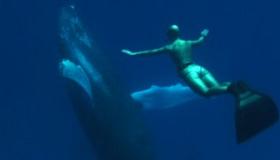 Sundance loved this passionate documentary on dolphin hunting, crowning it with the audience award. Skillful, unsparing and blessed with a great protagonist, The Cove is smart enough to stir up as much interest in its cause as Who Killed the Electric Car? did with the shuttered EV1, provided its post-festival word of mouth continues to build.

Thirty-five years ago, Richard O'Barry popularized dolphins, training (and living with) the bottlenose females who played Flipper on TV. But one day, a tragedy made him realize that his dolphin friends were miserable in captivity and, as he tells it, the very next day he was arrested for trying to free one from a theme park. He got out of jail and went to find another dolphin to help and he hasn't stopped since.

Louie Psihoyos' documentary follows O'Barry's efforts to undo the damage Flipper caused. When people want to reach out and touch their aquatic counterparts, other people want to make money off of it, and an industry has sprung up dedicated to capturing and selling dolphins to theme parks, zoos and illegal tanks. To O'Barry, ground zero is Taiji, Japan—a city tourists think is devoted to whales and dolphins but is in fact devoted to culling their population. Every season, thousands of dolphins swim past the rural coastal city and are driven into a cove. The lucky are sold into captivity. The unlucky are herded into the cove and killed.

O'Barry is convinced that if he could broadcast footage of the dolphin slaughter he could shake up government and worldwide complacency. Problem is, the Japanese keep The Cove fenced off and guarded—no one's ever actually seen what goes on in there, just the light shadow of red blood that spills from around the cove’s edge. So he and Psihoyos turn from eco-warriors to James Bond, hiring free divers to plant microphones under the water and Industrial Light and Magic to hide cameras in rocks. And then the team sets out for 30 days in Taiji, where the police tails their every move.

What goes down is legitimately suspenseful, and when the group gets the footage they want (but can barely stand to see) we're gutted. But writer Mark Monroe has skillfully made this story even bigger than a mass slaughter—it’s about geopolitics, cultural heritage, poisoned food and, most of all, activism. Here, O'Barry is framed as one of a dying breed of activists willing to put more on the line than a signed Internet petition. He's committed to the cause and unafraid of arrest. In the documentary's final scenes, he barges into a meeting with a TV broadcasting his Taiji footage strapped to his chest, holding his body firm as security hustles him out and we struggle not to cry.