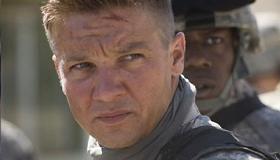 It has been nearly 20 years since director Kathryn Bigelow’s last bona fide box office hit, 1991's Point Break, grabbed $43.2 million domestically. Since then, 1995's Strange Days and 2002's K-19: The Widowmaker were disappointments, while 2000's The Weight of Water did not come near to earning back its estimated $16 million budget, bringing in a paltry $109 thousand domestically. The director of muscular action movies needs a hit badly and she just might get it with her visceral gut-punch of a war drama, The Hurt Locker, the story of an army bomb disposal unit trying to survive the final weeks of its tour in Baghdad. With its meaty, intelligent story and a plethora of violent pyrotechnics, it is the rare kind of movie that has plenty to appeal to fans of action and drama alike. But to succeed it will have to overcome the reluctance of filmgoers to embrace Iraq war movies—and that’s a reluctance that’s has doomed nearly every movie on the subject to the box office scrap heap.

The drama starts with a bang when the soldiers who spend their days clearing the streets of improvisational explosive devices (IEDs) in Baghdad are lifted off their feet by an exploding bomb. With only 38 days left in their rotation, the primary mission for Sergeant J.T. Sanborn (Anthony Mackie) and Specialist Owen Eldridge (Brian Geraghty) is simply to stay alive long enough to make it back home. Complicating that is their new boss, Staff Sergeant William James (Jeremy Renner), a soldier seemingly impervious to both peril and common sense, who leads his men into impossible situations.

Screenwriter Mark Boal was a war correspondent in Iraq who covered a bomb disposal unit there, which may explain why a film so filled with action and unending suspense eventually emerges as more of a character-driven drama. The film is full of the day-to-day detail of what these men do. One scene finds James intricately defusing a car bomb while Sanborn and Eldridge frantically scan the surrounding buildings for the terrorist who may hold a detonator.

But at the same time, Boal is just as interested in what makes these men tick. The story's canvas is large but Boal keeps his focus small, throwing a spotlight on these three men and most especially on James. James is a man fighting wars on all fronts, so doggedly determined to march to his own tune that he alienates the men around him. Ignoring danger he rushes headlong into action, exponentially increasing risk for himself and his team. He has a life waiting for him back in the States, including a baby, but his service has upended all that. Some soldiers in the Vietnam war came back home addicted to heroin, but the monkeys on James’ back in this 21st century conflict are adrenalin and the suspicion that the skills he's honed in Iraq have no place in civilian life. Character actor Renner, perhaps best known for his Independent Spirit Award-nominated turn in Dahmer, delivers what may be a career-making performance as this undoubtedly courageous but also foolhardy man.

Jordan substitutes for Iraq and Bigelow and her team have done a fantastic job of recreating the conditions of a country under siege where threats lurk around every corner and even children become pawns in the war machine. Cinematographer Barry Ackroyd's constantly roving camera further ratchets up the tension. Visually, The Hurt Locker is a stunner, but what makes it so different from the Iraq movies that came before are not its riveting images, forceful performances or engrossing story, but the film’s stance. It is not so much that Bigelow and Boal are apolitical; it is simply that they let the tale speak for itself. The Hurt Locker does not present the Iraq war as something to be for or against, but simply as something that is. Bigelow does not stint on portraying war's brutality, but the focus is strictly on the individual, not on the bigger picture, and the overall effect is more powerful and devastating for it.