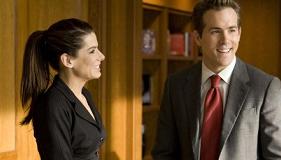 A high gloss, studio Romcom with clichéd jokes and conflicts that are as uncontroversial as they are predictable, The Proposal is rooted in the most classical of conventions and still finds ways to be surprisingly enchanting. Most credit should go to the criminally underappreciated Sandra Bullock and the reliably disarming Ryan Reynolds. Occasional beauty can be found in the direction of Anne Fletcher ( 27 Dresses, Step Up ), which is dominantly standard but features a few subtle and affective flourishes. Numbers should be moderate to good, as those who attend will be pleased and likely offer good word of mouth.

An office Romcom that takes place largely in the woods, this comedy about a green card marriage is a fish out of water story at heart.

When we meet book editor Margaret Tate (Sandra Bullock as a shockingly affectless Canook), she’s reading a manuscript on a stationary bike, somewhat predictably “speeding” towards a big screen image of a generic forest. Her highly controlled universe is a construct of her own discipline and stoically solitary dedication. Andrew (Reynolds), Margaret’s executive assistant, receives flirtation from women outside the office but is also similarly work obsessed. When Immigration threatens to deport her, Margaret blackmails Andrew into matrimony. The exam the couple have to take to prove they’re actually married (and not doing it for a green card) requires that they share their union with family, so Andrew’s upcoming family event is hijacked in service of the business-mandated marriage. As Margaret’s a relative orphan, her approach to her forced in-laws is both alienated and antiseptic. This naturally changes as we watch her unravel, and Bullock has wisely chosen to avoid turning her into some tightly wound workhorse who “loosens” in cliché fashion, choosing instead to let Margaret retain her intensity and focus even when doings things as supposedly relaxed as dancing, receiving a wildly awkward lap dance or comforting others.

The thin script by Peter Chiarelli is a classical cookie-cutter star vehicle and occasionally sticks the supporting cast with less than stellar comic material. Betty White’s role as the grandmother is full of bits as predictable as the sunrise, but if any comedienne is able to overcome the burden of foreseeable gags it’s Betty White. Dips in logic are noticeable but not wholly bothersome. Margaret is reviled by her coworkers but for no reason we see. (An unruly chorus of admins IMing frightened warnings does not constitute character development.) Still, the film is not without its moments. Some small jabs at motif are made, (Margaret’s stress inducing bike ride through a patch of Alaskan forest stands to affirm her status as the highly controlled fish out of her tightly contained water) but little event is made of these details. A scene in which Margaret and Andrew begin to connect is framed with delicate consideration. The frame holds tightly to each character as they lay in their separate, perpendicular beds. While they dialogue and reveal chemistry, the camera slowly pans, relocating them to the left and right of frame so that, as they begin to share emotional space the physical distance between them diminishes. In this interaction, the two concede to a human connection (they’re not exactly overwhelmed by emotion) and this highlights the tension built into the film’s premise: the conflict between the autonomy of career dedication and the compromise of human relationships. Even the family conflicts alluded to in the film speak to that tension. I suppose it’s to the credit of the actors that, lacking a useful solution to the issue, the film is still a comic crowd pleaser.