close
This train stays on track 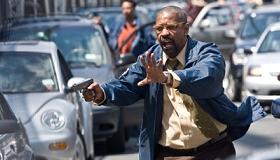 You can always count on a Scott, in this case Ridley’s little bro’ Tony, to jangle your nerves. The 1974 crime thriller he’s updating is an ideal vehicle for doing so, even if half the means he employs constitute overkill. Neither a huge improvement on nor a bastardization of the original, The Taking of Pelham 1 2 3 will transport relatively serious-minded summer audiences on the backs of Brian Helgeland’s script and two formidable lead performances. With Denzel Washington and John Travolta headlining, the picture should do substantial business; an R rating is the only foreseeable impediment to a runaway hit.

Sic Transit Gloria Hollywood describes what’s going on. The Taking of Pelham 1 2 3 won’t linger in the mind, yet time passes quickly and there’s no reason not to enjoy its fleeting pleasures. Without traversing any new ground and stopping just short of piping the smells of the subway into theaters, Scott offers a topical, visceral entertainment: his best since Crimson Tide. He and his fellow producers claim it’s based more on John Godey’s novel than the first film adaptation. Frankly, reading the book to test their assertion wouldn’t be a good use of anybody’s time.

Tense from the get-go, the sounds of the New York City subway system—screeching breaks, blaring horns, the whoosh and rattle of metal snakes—signal a decidedly urban thriller, a quality that endures even as Scott avails himself of every opportunity to go above ground beyond the confines of the Metropolitan Transit Authority’s dirty, subterranean jewel. In less than two minutes, four perps seize control of the 6 Local (which leaves the Pelham Bay station every day at 1:23 pm) north of Grand Central Terminal between the 51st and 42nd Street stations. They uncouple the cars, let the majority of straphangers go and are left holding nineteen hostages.

The crux of the movie is the mostly verbal confrontation between two substantial characters and actors. Travolta is in maniacal mode as Ryder, the angry man orchestrating the crime. Washington plays Walter Garber, the unlucky civil servant working as a dispatcher at Rail Control Center with whom he’s first in contact. Ryder bypasses the NYPD’s hostage specialist (John Turturro) and insists on negotiating with Garber, instructing him to find the Mayor—a beleaguered multimillionaire played by James Gandolfini. He demands a $10 million ransom, the maximum the city can disburse at any one time. If he doesn’t have it within an hour, he’ll start executing commuters.

There’s more to it than that of course. “Unknown variables” complicate Ryder’s motives as well as Garber’s position. These factors play out as the city rushes to move the cash from the Federal Reserve Bank to Midtown. As the minutes until the deadline tick away, Ryder and Garber spar over the radio and the authorities careen between incompetence and heroism. The local bureaucracy, the system at large and the individuals who comprise both are under tremendous stress, facts that Helgelund’s snarkily humorous screenplay highlights. Grudges and resentments radiate from all rungs of the ladder, from white collars as much as blue.

Much like Joseph Sargent’s original, this production batters the audience, albeit with contemporary music and even faster editing layered on top of today’s equivalent of bracing language and gun violence. Not a director known for choosing the quiet or subtle path, Scott goes overboard in trying to air out the piece. His camera takes to the sky as often as possible. He engineers a realistic “money run” through the streets of New York plus a final chase that, while exciting enough, feels more like boilerplate. Fortunately, the sound of burning rubber near the end doesn’t drown out the inherent drama.

It’s a sign of the times that the movie doesn’t rely too heavily on media coverage of events as they unfold. A passenger’s web cam plays the role an accidental onboard reporter might have in the past, allowing pictures to be broadcast from inside the subway car unbeknownst to the hijackers (who include a hapless ex-motorman played by Luis Guzmán, his era’s equivalent of Martin Balsam). The movie also makes excellent, restrained use of computer screens and other relevant technologies. For all its technical fastidiousness, however, logistical questions do arise. Would a police sniper bit by a rat still hit his target? In a post-9/11 world, would other subway trains continue to run during the crisis, even if it wasn’t deemed a terrorist plot per se? Is the Waldorf Astoria Hotel located where the movie’s geography implies?

These are non-essential details. At the heart of The Taking of Pelham 1 2 3 lies Garber, one flawed but dedicated civil servant. The role has much more in common with Washington’s natty detective in Spike Lee’s Inside Man than either his ATF agent in Scott’s preposterous Déjà Vu or his burned-out bodyguard in their excessive Man on Fire. Forced to rub elbows with loathsome individuals on both sides of the law, Garber busts his ass to do the right thing. And despite what Ryder says, he does find redemption in the viewer’s mind. He’s a source of civic and cinematic pride, and Pelham demonstrates how a gripping crime flick can be a great leveler.