close
So much for "less is more"

Transformers: Revenge of the Fallen 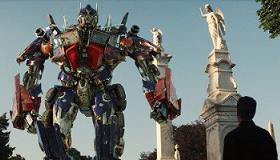 Two years on and it's much more of the same, in fact probably too much with director Michael Bay running riot with all of his warrior “toys.” Less definitely would have been more—yet that is probably not going to harm its prospects. The original grossed 700 million dollars worldwide and this sequel should do equally well, never mind all the ancillaries. And, of course, Shia LaBoeuf since his first outing has acquired a whole legion of fans to swell the ranks.

It is something of a relief that despite its protracted running time Transformers: Revenge of the Fallen does not take itself too seriously. There is a neat and jokey atmosphere that pervades throughout which helps any poor viewer trying to make narrative sense of it all.

My advice is to switch off your brainpower, get in touch with your inner juvenile self and go with the flow for this feast for the senses, orchestrated by the undoubted maestro of the genre Michael Bay.

The prologue pitches us into Shanghai where a strike team lead by Josh Duhamel’s Captain Lennox is hunting down the leftover baddies from Decepticon who are on the way to cause even more trouble.

Meanwhile, back in suburbia Shia LaBoeuf is about to go off to college, leaving behind Megan Fox as his girlfriend and his rather endearing but mad parents (Kevin Dunn and Julie White). He has forebodings that the evil Megatron (voiced by Hugo Weaving) is about to make his presence felt.

His suspicions are well founded. Soon Megatron is causing mayhem in multiple locations, including a stunning sequence atop the Brooklyn Bridge, another in Paris, the Pyramids at Luxor, the Nevada Desert and many other equally spectacular backdrops.
The action is as noisy and in-your-face as ever—and just as deafening for those of a delicate (or even normal) hearing disposition.

The machines of course hold center stage while the actors are mere players trying to avoid the hardware. Shia LaBoeuf sports a bandage, the cause of which was worked in to the plot to explain away his infamous accident during filming. LaBoeuf has enough of the innocent charm to inhabit a character caught up in circumstances that are way beyond anything his imagination could conjure up. Fox looks suitably delectable as eye candy for what will be the predominantly male audience profile.

Bay, who has a propensity for making movies that overstay their welcome, has probably milked this franchise for all its worth and then some. Let’s hope he’s not tempted to repeat himself yet again with the Autobots and Decepticons. That would be a leap too far.