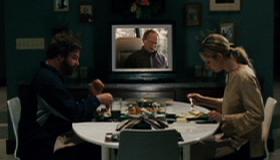 Starring comedian Zach Galifianakis as sad, average George Washington Winsterhammerman, Jared Drake's odd, evocative little picture will surprise audiences filtering in to see Galifianakis the comic. The anguish underlying his comedy sets is here center stage. Ambitious but modest, Visioneers is caught in the gulf between too edgy and not edgy enough, but after kicking around the festival circuit, this DVD release timed to Galifianakis' breakout role in The Hangover deserves to sell a more than few copies.

Say you're the leader of a nation and your people are miserable. You have two options: One, admit fault and fix the problems at their root, or two, cheer everyone up by force (or drugs). In the grand history of totalitarian Sci-fi, all rulers choose the latter. The weapons of choice in screenwriter Brandon Drake's dramedy are infomercials, entertainment and frightening people to think that emotions lead to dreams—which "cause instability and pain," cautions a doctor—or, in rare but bloody instances, trigger a literal physical explosion that kills thousands in the vicinity.

The cure for misery in this alternate universe is a scant exaggeration from today: "Inflatable castles, empanadas and women in bikinis!" chirps a radio announcer trying to forestall another deadly blast. Blake's humans are like fatal black holes—empty to the point of destruction. If you work, you work for Mr. Jeffers (D.W. Moffett), the perky head of the cheer-instilling corporation who uses a test to determine an employee's utility rank from one to five. George is a three, perpetually in unsung, under-utilized purgatory.

Wife Michelle (Judy Greer) has all the hallmarks of the enemy—she's shallow, impressionable and devoted to her TV guru Sara (Missi Pyle). If Sara says lube with butter, Michelle's willing to try. (Which is part of why she and George haven't had sex in ages—all instinctive pleasures have been over-analyzed to pointlessness.) Yet Greer—a talent who's been stuck in second-string roles in half-decent comedies—is a smart enough actress to let Michelle's desperation shine through. In a great, but unrealized existential climax, she rips the lids off her Tupperware with the force of a mother wrenching a garbage truck off her baby.

But George's heart belongs to his level 4 supervisor Charisma (Mía Maestro), a rebellious beauty he's only recently met. When Old Man Jeffers (Aubrey Morris), the company's founder, advises him that the surest route to happiness (a.k.a. dispassion) is to kill what he loves, George picks up a knife and sets out to find her. It's a devastating moment, and the film needs one or two more of them.

Jared Drake and Brandon Drake's film follows the template of Brave New World, but its ordinariness is distinctive. A dystopian apocalypse is most frightening when it looks a hell of a lot like today. The production quality is modest yet assured, as is Galifianakis who dampens down his stage presence and lets his great bushy beard be his most dominant and memorable trait. James LeGros has a small role as George's brother Julieen, a level 5 alpha male gone rogue who’s fixated on pole vaulting—he's hoping to inspire a movement to love and excel at something. But his revolution is hapless—in a cutting insight, Julieen dismisses his hippie cult, slackers who dance and play volleyball instead of challenging the system, saying: "They're doing the same thing as everyone else, just with a different name—entertaining themselves."