close
Humor as fresh today as it was in B.C. 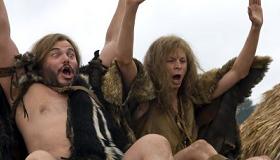 Evangelicals might take one look at ancestors Zed (Jack Black) and Oh (Michael Cera) and decide they'd rather descend from monkeys. Harold Ramis' comedy is more evolved than the trailers let on, but after a solid hit to the popcorn audience's vestigial funny bone, the humor retreats into a lazy, generic swamp. Weekend returns should be respectable, but few will excavate it for a second go-round on DVD.

Jack Black's caveman is as primitive as his usual meatheads, his hair and eyes still wild, his social graces still equal to a stray dog. Here, however, he matches—not clashes—with his surrounding culture, and it's Michael Cera who can't get with the program of jackal dances and clubbing crush Eema (Juno Temple) on the head. Cera, too, is the same as ever. He speaks haltingly, adding unexpected pauses to his sentences like a gentle Christopher Walken—he’s so sweet, he talks to berries. But his Oh is harder to please than Cera's usual virginal ingénues, and after Zed eats the forbidden fruit and gets them expelled from their jungle village, his resentment is a nice sour jolt.

The first half of Ramis and co-screenwriters Gene Stupnitsky and Lee Eisenberg's script has fun riffing off Biblical lore and caveman minds. Black charms his love Maya (June Diane Raphael) by making fun of how her parents were torn apart by a pack of wild dogs, and wives and sisters are offered around like after dinner mints. We meet Adam and Eve (Ramis and Rhoda Griffis), Cain and Abel (David Cross and Paul Rudd), Abraham and Isaac (Hank Azaria and Christopher Mintz-Plasse) and watch Zed and Oh get motion sick from the five-mile-an-hour speeds of an ox-drawn cart.

Once the duo makes their way to Sodom to save Maya and Eema from slavery and hellfire, the humor regresses to swords and sandals slapstick with a cheap and lame overdose of gay panic gags. (Threats to Black and Cera's posterior or package outnumber actual jokes 2:1.) Chief among the many, many examples of frat humor are Kyle Gass as palace eunuch Zaftig and Oliver Platt's High Priest, a hairy, horny homosexual letch who takes his makeup tips from that other Christian legend, Tammy Faye Baker. Here, Ramis, the comedy king of Groundhog Day, is slumming. And I'm surprised an off-kilter talent like Cera would indulge him, swallowing his gag reflex when Platt commands him to rub his chest with oil. The last time that joke felt fresh was B.C. It clashes with the script's closing bold moves, questioning the existence of God and floating the theory that each of us are responsible for our own destiny. I'd like Ramis' religion more if it didn't overlap with the Prop 8 fear mongers.