close
Don’t be surprised if this Summer provides at least a somewhat hot season at the box office. 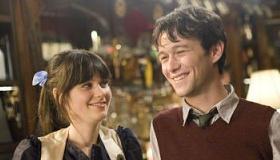 Most of what’s satisfying about the corporate simulation of an indie romantic comedy that is (500) Days of Summer is structural. Screenwriters Scott Neustadter and Michael Weber and director Marc Webb show a real insight into the contemporary audience by creating a movie that almost literally alternates between scenes of a relationship’s glorious beginning and the details of it falling apart. The dating crowd of today is so very different from their parents, after all; divorce and even multiple marriage are such a fixture of modern adolescence, and uncommitted sex and partner switching so pervasive by college age, that commitment-phobia and emotional skepticism are the rule not the exception for the unmarried but sexually active moviegoer. What could reflect that reality better than a call and response juxtaposition of early infatuation with late apathy and the blood and mess of the rejected lover’s broken heart?

The Summer of the title is not a season but a woman, under-written (as are so many female characters created by male writers) but fortunate enough to be embodied by the always winning Zooey Deschanel, whose vast interior resources help fill in the gaps. Tom (Joseph Gordon-Levitt) is a greeting card writer who studied architecture but doesn’t have the courage to follow his true calling, and when he sees Summer, he falls instantly in love like people do in fairy stories. The problem is, Summer doesn’t. It’s 2009, so this doesn’t stop them from becoming lovers of course. Or didn’t, since the movie is taking place in the aftermath of their failed relationship, and flashing forward and back through time as Tom tries to figure out “Why?”

(500) Days has pretensions to being the anti- Garden State —a movie where the quirky dream girl doesn’t so much save the hero as make him stumble and accidentally fall forward. There’s no real chemistry between Deschanel and Gordon-Levitt though—he grins a lot when Summer’s around, but otherwise has a hard time lighting up the room as the besotted do. Webb does all he can to help his lead actor externalize what his acting can’t convey—there’s a pithy pop score that functions as a kind of Greek chorus and one truly brilliant musical number after Tom’s first night of sex with Summer, set to the old Hall and Oates synth-pop hit “You Make My Dreams Come True.” Gordon-Levitt does better with the scenes of romantic desperation, but it’s symptomatic of how unobservant this movie frequently is that much of it is set in the kind of ’60s sitcom publishing house environment the internet has already killed, or that Gordon-Levitt manages to list all the things he loves about Summer—her laugh, her birthmark, her knees—without ever once mentioning what a rewrite should have inserted: Deschanel’s remarkable spotlight blue eyes.

The huge Sundance reaction to this picture has some predicting big box office, but Sundance ovations are ephemeral— Son of Rambow got one, but rather than rising to its feet, the wider world chose to sit that film out. Deschanel deserves a hit, though probably not for her work here, which puts this Ferrari of an actress in idle much of the time. But given its focus on the zeitgeist topic of romantic uncertainty and the true wit of its construction (not to mention the savvy marketing pros at Fox Searchlight who’ll be handling this movie), don’t be surprised if this Summer provides at least a somewhat hot season at the box office.