close
These blades are kinda dull 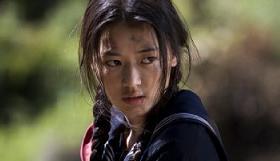 Substituting Hong Kong-style martial arts action for the innovative animation that made the 2000 original one of the most memorable Japanese anime on record, the live-action Blood: The Last Vampire feels both derivative and strangely amateurish, an awkward blend of Hong Kong-style combat set pieces and clumsy English-language dialogue scenes that verge on laughable. Fans of Chinese and Japanese swordplay pictures already accustomed to this type of scattershot filmmaking won’t have any trouble distilling the good from the bad, but minus the more forgiving support of anime fans and mainstream action buffs, box office prospects look anemic even in limited release.

Set on and around a Vietnam-era American military base in Japan, Blood centers on a centuries-old battle between humans and gargoyle-like demons (the “vampires” in this scenario) able to camouflage themselves with human form. Saya (Korean actress Jun Ji-hyun of My Sassy Girl, here credited under the screen name Gianna) is a half-human, half-demon slayer on an ancient quest to terminate the demonic queen bee, Onigen (Koyuki), responsible for killing her father some time in the 16th century. A clandestine, Men In Black -type organization dedicated to demon-slaying provides her intelligence and backup, though it’s clear theirs is a tenuous alliance built more on shared aims than common values or tactics.

For reasons that don’t make much sense, Saya goes undercover at the base school (as undercover as an Asian girl in an all-white school can be) where she instantly identifies and disposes of a pair of demon girls just as they’re about to feast on the base commander’s daughter Alice (Allison Miller). Saya goes on to save Alice’s bacon at least one more time, forging an uneven alliance that consists of Saya doing everything and Alice not doing much of anything except being in danger.

Period flashbacks to feudal Japan provide back story on Saya and set the stage for a modestly rousing climax, though it’s really nothing that hasn’t been done considerably better countless times before, or more cogently. It’s really little more than a redressing of a popular Japanese genre—the lethal female—framed with a plot largely borrowed from Japanese myth and such American fare as Buffy and Blade. The original anime remains far superior, both in terms of plot and style, while the new film’s action sequences—staged by longtime Jet Li choreographer Corey Yuen ( The Transporter films)—end up only mildly diverting, at best. Part of the problem is the admittedly confused pedigree of Chinese and Japanese sources and influences, though the real issue is that nobody seems to care enough about the film to bother doing anything right. Director Chris Nahon—the former French video director who previously helmed Jet Li’s Kiss of the Dragon —is ill-equipped to deliver similar results here, instead heaping on a messy pile of lackluster acting, substandard effects work, lazy plotting and haphazard production values, all of which point to a production conceived and executed for no reason but to exploit a popular pre-existing property and pay off a few mortgages.

Fans looking for more satisfying Japanese swordplay tales with strong female leads are urged to revisit the classic Lady Snowblood pictures or their more recent offspring, Azumi and Princess Blade. If the makers of Blood: The Last Vampire wish to truly honor their distinguished source material (and distinguish themselves from that film’s very disappointing television series spinoff) with further efforts at franchising the property, these are the touchstones they would be well-advised to embrace.