close
A layer of tarnish on the American dream 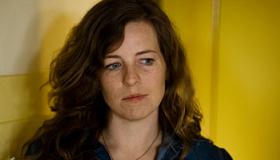 California’s boomtowns of yore, with their infinite orange groves, have undergone a mass exodus and only remnants of what looks and feels like nuclear fallout remains. Filmmaker Lee Anne Schmitt scouted her shots many moons before she locked and loaded her camera with reels of 16mm stock. The result is a jarring jaunt through the underbelly of Americana, full of austerity and woe. As tasteful as it is, it’s hard to imagine a stampede of mainstream folks crossing over to this fringe fare.

America still manufactures things but the output is shying away from bricks and mortar and into tech-based industries. Planning products here for overseas production seems to be the model du jour. Filmmaker Lee Anne Schmitt trails backward to a bygone era when the glory and power was with lumberjacks and journeymen who sawed down their own redwoods, milled reams of paper, mined minerals, harvested crops and built insulated self-ruling communities to provided a legacy for future generations. Trouble is, these small corporate towns and would-be cities have flat-lined.

Up into the distant recesses of the California Mountains lie various timberlands. The opening scene slowly captures the forest, split by a neglected dirt road. Schmitt narrates and intermittently offers-up factoids in NPR-like cadence. Schmitt’s camera stands high above an interstate where rest stops, McDonalds’ and gas prices solely dot the landscape. Some of the towns are still pumping. One look at the stacks of logs at a mill in Chester, CA and you’re a believer. Still-life images of lumberjacks as heroes contrasts with Schmitt’s references to her roughneck neighbor in the motel who works the dayshift routinely and returns in the early afternoon to down a six-pack.

Much is the same from town to town. Scotia, CA is seen through peephole fashion. Machines do the work (overshadowing the people, who are unseen) and instead of logs there are piles of wooden sheets layered and beautifully arranged. Calico, CA has become a theme park. Some of the domains are akin to morgues. You wouldn’t think anyone had lived in Darwin, CA for ages until you see a cordless coffee maker resting on a countertop. The only reason California City is still in business is because of the massive penitentiary that houses residents and payrolls its shielded workers. Same goes for the lifeless stretches in McKittrick, CA, McCloud, CA, Westwood, CA—so many vacancies and boarded-up homes; every one of them a devoured dream.

Slowly the film comes closer and closer back to civilization. We enter some of the unpolished spaces in Silicon Valley, where the tech boom’s still got its thrusters. Even there, Schmitt peers at the spaces the cartographers have yet to chart. Only in the distance do you see the sleek, cubed modern Krypton basking in the sun that is Silicon Valley.

It’s a harsh sight to see combed greenery and palm trees with floral varieties stemming perfectly from the ground after we’ve seen so many landscapes awash in grime and decay. And this discomfort is just what the guide had in mind. The collision of landscapes has a far more profound effect than any explosive diatribe ever could. This is an epic poem. Schmitt didn’t have to travel far at all to land on a goldmine of truths that dulls the pristine finish of the American dream.