close
What a struggle 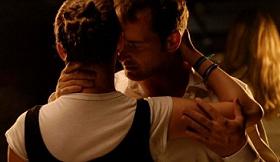 Much like Francis Coppola’s recent Tetro, Boaz Yakin’s Death in Love is a strangely indulgent and highly personal film seemingly crafted less as a piece of entertainment than a work of expression from an increasingly conflicted artist. Yakin’s largely self-inflicted struggles are no secret—his career is a restless patchwork of the personal and the commercial—but never has he been quite so nakedly forthcoming as in his new film, an ambitious, messy, somewhat cryptic yet strangely indelible effort fated to attract very little attention at the box office apart from fringe aficionados and psychosexual masochists.

The film begins with a disturbing, graphic sequence from a Nazi-era concentration camp in which a young Jewish woman is introduced to a Nazi doctor. The intimation of an impending affair is interrupted by a flash forward to the present day where a charismatic but psychosexually tormented 40 year old con man (Josh Lucas, who is also credited as Executive Producer) engages in what can only be described as a kind of intellectual coitus interruptus, killing the moment with a would-be lover by pretentiously rambling on about a host of mid-life crisis issues. As the film progresses the root of his problems is made manifest: a horribly dysfunctional family that includes a sheltered, obsessive-compulsive brother (Lukas Haas) and a cruel, narcissistic mother (Jacqueline Bisset) who, as it happens, was the young woman in the concentration camp. Periodic flashbacks to that period confirm the nascent affair that Yakin endeavors to connect to the very different struggles faced by the two brothers in the present day.

From a plot perspective, there’s little going on here apart from a fairly conventional and highly predictable “con” thread featuring Adam Brody as one of Lucas’ aggressive new partners. Anyone even vaguely familiar with

The film’s more pressing concerns, however, are those that defy its structure—the turmoil that resides in Lucas’ and Haas’ heads, the familial scars that grow deeper and more infected by the day, the ways in which each of the characters strives to heal their wounds with sex, not only failing repeatedly but further corrupting the very act of intimacy in the process. In short, this is a movie about hopelessly screwed up people who become even more screwed up by the minute, implying that some people are just doomed to lives of unending dismay.

There’s certainly no rule that says movies must all be fun and frothy—some of the greatest and most engaging works of the cinema are among its darkest and most disturbing. But Yakin never quite gets enough of a handle on his obsessions to provide a meaningful context. The Holocaust tie-in and the exoskeleton of a clever con, which are designed specifically to provide context, end up feeling more like indulgent distractions while the dialogue, which repeatedly tumbles into existential diatribes, defies authenticity.

It’s been six years since Yakin directed a film ( Uptown Girls ) and ten years since he directed a film he also wrote ( A Price Above Rubies ). That’s plenty of time to let torment and self-reflection simmer and mutate into self-loathing, particularly when the filmmaker in question has a history of hating himself for succumbing to mainstream commercialism. After the success of writing Clint Eastwood’s The Rookie in 1990, Yakin returned four years later with the surprisingly introspective indie Fresh as his directing debut. Having returned to both the commercial and mainstream for Remember the Titans in 2000 and Uptown Girls in 2003, Yakin seemingly couldn’t take it any longer—and the result is Death in Love.

Take that, then, for what it’s worth. Neither a pan nor a recommendation—but simply an informed warning.