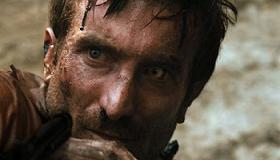 District 9 is about the apartheid struggle in South Africa. For those under the age of 35 or so, apartheid was the system of racial segregation legally established by the government of South Africa between 1948 and 1994. No matter what else it seems to be about, District 9, a film made a young, white, South African director, is about apartheid. Co-writer/director Neill Blomkamp spent his formative years living under the system of apartheid and has conscientiously insinuated the issue into his film. The attitudes, ideals and actions of the characters, from everyday citizens to government officials and those in business, reflect those that were common during the apartheid regime. The filmmakers, including producer Peter Jackson, have stealthily laid the artifacts of these dark days beneath the guise of an Alien invasion movie that is intense, graphically novelistic (though it’s an original story) and just funny enough to keep you thoroughly entertained, even while the subtext is of a very serious nature. Buzz and an also clever marketing scheme suggest this should be worth a few bucks at the box office—especially if the audience is mostly under 35.

The film is told using a number of cinematic modes including documentary footage, mockumentary footage, newsreel accounts, surveillance cameras and the standard story elements of narrative fiction. This is actually less chaotic than it sounds and serves to move the narrative along at a brisk pace. There’s little need here for filler. The filmmakers can justify any narrative exposition by putting a camera on the action (any potential camera) and just showing us, or having the characters explain the action to the cameramen. When all else fails Blomkamp inserts a movie moment and presses on. Lovely. Mister Blomkamp is a fine director who cut his teeth on commercials and music videos, and at the knee of director and special effects guru Peter Jackson. Between the two of them (Jackson’s company was employed for the effects) they’ve come up with the best CGI effects film to date. The spacecrafts, the cityscapes, the weapons effects and the aliens themselves (which we are told are 100 percent CGI) are all exceptional. But the best thing in the movie is lead actor Sharlto Copley, a long time friend of the director and fairly novice actor. Copley is pitch perfect, delicately straddling the line between ordinary Afrikaans racist and empathic hero.

The narrative of District 9 revolves around a giant alien spacecraft that came to rest above downtown Johannesburg, South Africa, some 20 years before the story began. Inhabited by one million crawfish-like, cat food and raw meat eating, humanoid aliens, little can be discerned about where the ship came from or who the creatures are. They are simply here. They are strong but without direction or purpose, mostly docile and apparently of little use to humanity. So we warehouse them—in District 9. Then, we decide to forcibly move them to a different, shoddier, interment camp.
While other nations are far from guiltless of such cruelties, the emphasis here is on the South African history. Still, the structures the film employs are incisive and direct and, if you’re over 35, they might piss you off.