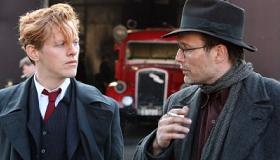 Rich with espionage intrigue, period perfect World War II details and fascinatingly complex lead characters, Danish filmmaker Ole Christian Madsen's drama Flame & Citron, about Danish resistance fighters in Nazi-occupied Copenhagen, claims the filmmaking artistry and standout storytelling needed to gain critical word of mouth. Arthouse fans of Danish actor Mads Mikkelsen, who know him as much for his roles in the foreign-language films After the Wedding and Open Hearts as his role as Le Chiffre in the James Bond blockbuster Casino Royale, will bring Flame & Citron a moderate core audience when IFC releases the film July 31 in theaters and on VOD. With modest platform plans, Flame & Citron will remain a favorite with critics and experience much-deserved larger audiences via DVD.

Bent, code-named Flame (Thure Lindhardt), and Jorgen, code-named Citron (Mikkelsen), are Danish resistance fighters in Holger Danske, a famous World War II resistance group bent on assassinating Danish collaborators in Copenhagen. Their targets are mostly pro-Nazi Danes, but the fighters press their leadership for more aggressive actions and the right to assassinate Germans as well. Once they do so, violent retributions are inevitable, as is the emotional trauma of personal endangerment and the moral complications resulting from the taking of livesÑeither for the right or the wrong reasons.

Thure Lindhardt is compelling and believably complex as Flame, a fervent anti-fascist willing to put his life on the line for the resistance. Recognizable to US audiences for his supporting roles in Sean Penn's Into The Wild and Ron Howard's Angels & Demons, Lindhardt supports this epic drama well.

Purposefully subdued as Citron, a man torn between duties to the resistance and duties to his family, Mikkelsen is the greatest marquee asset for Flame & Citron. His grounded, simmering performance is also further proof of his status as one of Europe's greatest actors. Stine Stengade, as Flame's mysterious lover, has a small but pivotal role as woman not to be fully trusted.

A period war drama like Flame & Citron can be a tricky genre to deliver well, but director Madsen, a former member of the Dogme group of Danish filmmakers and a feature director since 1999, makes dramatic use of the true events that form the story. With a visual extravagance equal to Hollywood cinema, Flame & Citron, which premiered at the 2008 Telluride Film Festival and followed with screenings at the Toronto International Film Festival, is one of the biggest budget Danish films to date ($8.6 million) and worthy of comparisons to beloved French World War dramas like The Last Metro. Cinematographer J¿rgen Johansson makes artful use of the World War II era backdrops. Production designer Jette Lehmann brings much-appreciated authenticity to the film.

A hit in its native Denmark, Flame & Citron faces a crowded specialty marketplace in the US and the additional obstacles endured by all foreign-language releases. In this case, sadly, theatrical challenges will win out over their good work.