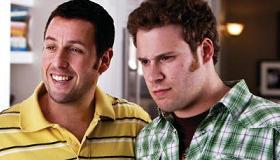 Judd Apatow, director of The 40-Year Old Virgin and Knocked Up, wears his influences on his sleeve for his newest, Funny People. This comedy about comedians, mistakes and mortality is as constantly engaging and reliably hilarious as you’d expect from Apatow, who stocks his cast with his regulars including Seth Rogen, wife Leslie Mann and Jonah Hill. The inclusion of old friend Adam Sandler, a colleague from his stand-up days for whom he’s written but never directed, makes the story seem particularly personal. That, in tandem with the style of the film (a clear channeling of James L. Brooks with streaks of Norman Lear), makes this Apatow’s bravest and most personal comedy yet. For a minute there, we’ll all think we cracked the consciousness of the man who brought us Ron Burgundy. This is one everyone will be talking about. Ticket sales will be big and should likely see a swell when word of mouth hits.

George Simmons (Sandler) was always a nice guy comic, but success has taken a toll. After hitting it big in stand-up, he made an arm’s length roster of broad comedies now only fit for children, and even then not really. It’s not fair to say he’s become a bad guy; he’s just neglected his loved ones and learned to enjoy the spoils of his fortune (a big house, tons of free luxury items, sex with strangers, trips in private jets) without any regard. So when a doctor tells him he’s terminally ill, he tries to figure out where it all went wrong and starts loitering his old comedy clubs. There, he meets Ira Wright (Rogen) and his friend Leo (Hill), and invites them to write jokes for him. It’s a huge opportunity for Ira, whose career has existed only in fits and starts, and who clearly lionizes Simmons. Simmons confesses he’s ill and Ira, in a breathtakingly hilarious scene at a restaurant, begs him to tell loved ones about the illness. Simmons then confronts his angry family, frustrated friends (get ready for beaucoup celebrity cameos) and “the one that got away.” When an experimental drug program is successful in suppressing his illness he has to tell his friends he’s well, but that’s not his largest hurdle. When he was ill he had no choice but to pull himself together and be the nice guy comic again. Eminem, in a short but brilliant conversation, comes out and asks Simmons if he’s going back to being what he was and “having sex with girls he doesn’t like.” Simmons doesn’t have an answer—but this is an Apatow film. The road may be hard, but everyone in the world of Apatow is good underneath it all.

The improv and free flowing action that factored into Apatow’s other works, from his two previous directorial efforts to his television shows ( Freaks and Geeks and Undeclared ), does so much to keep the tone of this otherwise somber story light and vibrant. A shift occurs midway when, after Simmons has learned he’s well, he travels to the Bay Area and creates a domestic conflict with his past lover Laura (Mann) and her husband Clarke (a fantastically unpredictable Eric Bana). Laura and Clarke’s marriage is tension set with cracks at the seams, and their frustration with each other is a perfect parallel to Simmons' spiritual malaise. They both have it good and have little idea how to maintain. The fact that the film feels like it’s happening right in front of you makes the stakes seem all the higher for these characters who, while they screw up and hurt each other and get mad, want to do good even while they’re failing.

Apatow has built a brilliant machine here, where both interesting character dynamics and casual but well conceived direction lend a real attention to what feels like his overall philosophy about people. In contrast to the comic manchild (now a stock character I could really do without) who ambles his way towards a late and incomplete coming of age, Apatow’s characters wrestle with the mysteries and challenges of adulthood—because adulthood is fraught with responsibilities and consequences. Here, he’s entered into the territory of mortality and marriage, and he’s done it in a film that’s his most introspective to date. There’s so much here to discuss and not a frame of it lacks for laughs. And that’s as it should be, don’t you think? Life and limb require a light heart to survive.