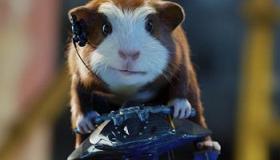 It’s sort of Mission: Impossible with Guinea Pigs instead of Tom Cruise, but for pure family fun in the middle of summer the often hilarious G-Force has it all: action, laughs and heart. Jerry Bruckheimer’s first 3D production, G-Force revolves around a covert government program in which rodents using high tech spy equipment are trained for espionage and find the fate of the world may just be in their little hands  er paws. Aimed squarely at the youngest moviegoers in the family this breezy, impressively crafted CGI fest should squarely hit the moppets “G” spot and turn in some nifty matinee numbers for Disney, who can also count on huge returns in its ancillary afterlife.

The ludicrous premise is actually based in some form of reality. Veteran Director and Oscar winning Special Effects wizard Hoyt Yeatman discovered the government does in fact use different kinds of animals for spy experiments. Utilizing this small grain of truth it wasn’t that far a stretch to invent a scenario in which a ragtag team of Guinea Pigs with the help of a mole (literally) and a very buzzy housefly could turn into an effective “G Force,” taking on sensitive missions that wouldn’t be out of place for even James Bond to tackle.

With the technical help of their “father,” Dr. Ben Kendall (Zach Galifianakis), a genius that invents little headsets that give the rodents the ability to speak perfect English, the Force must deal with all sorts of adversaries, most notably an evil billionaire industrialist (Bill Nighy) out to destroy the world (of course) by rigging household appliances. They also face stiff resistance from an FBI special agent (Will Arnett) who wants to shut down Kendall’s experiment and the G-Force at any cost. Going undercover as (you guessed it) guinea pigs in a very funny pet store sequence, their plans for escape go awry and they must get back on track in order to save humankind.

Yeatman, working from an amusing script by the husband and wife writing team Cormac and Marianne Wibberley ( National Treasure: Book Of Secrets ) rachets up the possibilities for action at every turn with expert help from his own CGI wizards who bring this premise roaring to life. Endless gadgets find their way into ingenious action pieces. Rocket assists and motorized exercise balls are hilariously employed and the use of 3D effects hit just the right note.

The film gets its heart and soul from an all-star voice cast who create true individuals that make this thing fly. Darwin (Sam Rockwell) is the determined squad leader, Blaster (Tracy Morgan) loves extreme weapons, Juarez (Penelope Cruz) is the girly martial arts mistress, Speckles (Nicolas Cage) specializes in computers but is nearly blind, Jon Favreau plays insecure pet shop acquaintance Hurley and a Ferret impersonator named Bucky (Steve Buscemi) round out the colorful cast. Among the live action actors, Nighy is properly sinister and always fun to watch while comedians Galifianakis and Arnett both play it totally straight this time out.

Harmless action comedy carries a PG for some reason but the “G” in the title tells it all and kids of any age will have a blast.