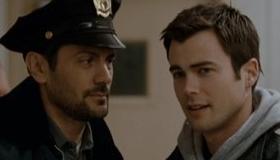 There comes a time in every major actor’s career when he realizes he should direct. He’s absorbed enough from the directors with whom he’s worked and, as a trained actor is already good with character. Oscar-winner Morgan Freeman, he of the stentorian voice, who gave earthy, quietly powerful performances in The Shawshank Redemption and Unforgiven, is finally getting his turn with Homecoming. In the film, Mischa Barton plays a psychotic ex-girlfriend whowait. Morgan Freeman didn’t direct Homecoming ? It was directed by Morgan J. Freeman? The guy who did American Psycho 2 ? Really? Well that’s a relief, because Homecoming is a silly, low-rent mash-up of Misery and Fatal Attraction, featuring neither the clever psychology of the former nor the layers of emasculation and consequence of the latter. It’s as straight-to-video as a film can get without going straight to video. Even for teens unfamiliar with real suspense, this weak button-pusher with unexplored camp aspirations should dissolve on contact.

Barton hasn’t done much since leaving Fox’s The OC and it’s easy to see why. Her beauty is undeniable, but she exists in that iffy casting space between young lady and full-blooded woman. And that voice, smoky yet flat and inexpressive, doesn’t help. Here she plays Shelby, the prettiest dead-ender in the depressing, wintry town of Mt. Bliss. Looking as if she’ll eventually grow old and become Flo from the sitcom Alice, Shelby has gone from high school cheerleader to proprietor of the bowling alley she inherited from her mother. Her days consist of keeping the bowling alley’s diner stocked and obsessing over ex-boyfriend Mike (Matt Long), who left town months earlier for the relative fame of a college football scholarship. He’s the town’s big success story, and his return to Mt. Bliss (Go Tigers!) for the Christmas homecoming game is a major event, culminating in the retiring of his high school football jersey. Shelby, however, never got the message that the two have broken up. Mike is “all she talks about” and the budding nutcase has been building an addition onto her home so they can start a family. When Mike returns to Mt. Bliss (Go Tigers!) with upscale new girlfriend Elizabeth (Jessica Stroup), Shelby concocts a plan to dispose of her romantic rival and keep Mike for herself.

It’s possible Homecoming could have worked had screenwriter Katie L. Fetting devised a psychological trap so fiendish that everything else is forgiven. Then again, if the psychological trap were so fiendish, the film would have attracted higher profile talent. Shelby’s initial plan is to screw up Elizabeth’s first meeting with Mike’s parents by getting her drunk on tequila. But things turn criminal when Shelby hits Elizabeth with her car while she’s dragging her luggage down a darkened road. Elizabeth wakes up to find herself in Shelby’s house with a sedation drip in her arm, the better to keep her immobilized while Shelby runs around claiming she and Mike are still together. If it seems like I’m giving away too much, that’s because I’m giving you all you’ll ever need to know. Lifeless programmers like Homecoming depend on audiences being unaware that there are infinitely better examples of the genre available every ten minutes on cable. But unlike Misery, the violence escalates. The psychological gamesmanship, however, does not. It’s really just a question of how far a functional director like Freeman will go once Shelby pulls out the shears and the gun. The answer becomes important because it’s all Homecoming has to offer. And I guess the movie becomes briefly ambulatory when Shelby catches Elizabeth during one of her many escape attempts. Otherwise, we’re left with the investigation into Elizabeth’s disappearance, which is merely Mike on tiresome worry-patrol with his cop cousin Billy (Michael Landes).

Freeman occasionally indulges his impulse to not take this tripe so seriously. Indeed, the movie’s high point comes when Shelby lustily devours an enormous ham sandwich mid-bloodbath. More moments like that and Homecoming could have skated by as a marginal example of lesbian bondage camp. Otherwise, this is a bad movie unconcerned with its own badness because it’s made for an audience less likely to recognize undistinguished filmmaking. So take it from a high school loner who would have greatly enjoyed Mischa Barton being my high school stalker: go rent Misery. Or Fatal Attraction. Or, Heaven help me, even Swimfan.