close
Lynn Shelton is a smarter, even raunchier Judd Apatow who over-indulges her excellent cast. 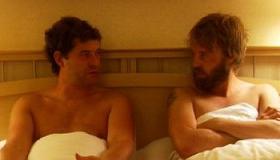 Sundance has been so many things over the years—the launching pad for the Quentin Tarantino fad, the haunt of the Blair Witch, the terminus for the road trip in Little Miss Sunshine, Jigsaw’s birthplace and on and on—that it’s easy to forget how the film that started it all (and launched Miramax into the bigtime) trafficked in arthouse titillation and (what the ancient world of 1989 took for) sexual controversy. That picture was Steven Soderbergh’s sex, lies, and videotape, and writer/director Lynn Shelton’s amusing, if long-winded, sex farce Humpday both recalls Soderbergh’s low-budget comedy of dysfunctional sexual manners and shows it up for the tame entertainment it would be in 2009; in a time where amateur porn is downloadable for free by the gigabyte and voyeurism isn’t so much a fetish or perversity but a teenaged, MySpace right of passage.

Humpday begins with a pretty straightforward sitcom set-up. Straight-laced married couple Ben and Anna are trying to have a baby to round off their perfect suburban life. Then Andrew, Ben’s wild old college pal, unexpectedly hits town, splashing down against the smooth surface of Ben and Anna’s world like a jagged rock on a pond, and causing Ben to strain at a leash he didn’t know was there.

Given that premise, and the film’s premiere at a festival long considered a bastion of gay liberation, the outcome of Humpday at first seems foregone: either Andrew, Ben or both will discover his true sexual identity is gay or at least bi-curious. But Shelton isn’t really interested in gay lib messaging per se, rather in the hidden forms of attraction and repression that can lurk even within the most seemingly straightforward “straight” friendship. Unlike the uptight protagonists of Soderbergh’s “adult” classic, Andrew and Ben are children of the children of the sexual revolution, and sexually active in a time when the only real taboo is to turn away from exploration. This is a more confusing predicament than it might seem, and Shelton honors its complexities: Are Andrew and Ben going to go through with the porn scheme because they’re secretly in love? As a testament to the depth of their friendship? Or because of some infantile hipster code that says they’d be uncool puritans if they backed down? Having raised all these intriguing possibilities, neither they nor the movie think it’s important to decide.

The actors, principally Mark Duplass, Joshua Leonard and Alycia Delmore, are terrific and natural, playing their scenes in something resembling the semi-improvised style of Judd Apatow’s recent work. This is fortunate, because Humpday is overwhelmingly dialogue-driven, even borderline talky. A lot of the conversation is witty and plausible; even Anna’s ultimate acceptance of Ben and Andrew’s scheme seems convincing. Shelton’s ability to get terrific performances out of an unknown cast borders on the astonishing. Still, she might be in love with her footage just a little too much (an irony, since Shelton started her film career as an editor) because there’s no polite way to say it: there are portions of this movie that really drag and the players are so winning they didn’t need to.