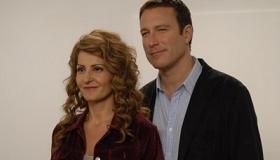 There’s nothing wrong with a good romance: flowers, sweets and love letters; hearts break and hearts mend; lonely hearts (who aren’t-so-lonely, after all); jealous love; twisted love; puppy love; smuggle the love; fall; hard; rebound; slamdunk. True, the themes never change. But the manner in which they’re exploited in I Hate Valentine’s Day is an unrepentantly formulaic feast for toothpaste focus groups—who appear to be the intended audience. Only a few sparks are yielded by recasting the romantic leads from Nia Vardalos’ breakout hit, My Big Fat Greek Wedding. Auds who don’t mind a tired TV dinner (because it’s exactly like the last one and the one before that) can do a little dance in the film’s honor. The rest will skip the theater run to watch it on the tube while writing a Hallmark card to grandma come mid-February.

The picture is set in the nicer haunts of Prospect Heights, Brooklyn, near the park where strollers stroll three-deep and first-name merchants know each other for better or worse. Genevieve Gernier (Nia Vardalos) runs a flower shop called Roses For Romance.

Genevieve believes that relationships don’t last (at least the happiness wears away) and in turn there’s no need to go the distance. Five dates are all you need. Her motto? “When the romance is gone it’s time to move on.” Her no-strings-attached system gets its toughest test with a fellow who’s got a similarly alliterative name, Greg Gatlin (John Corbett). Greg, who used to be a high-powered attorney, shed his lawyer skin to play restaurateur. He buys a cursed spot across from the flower shop to run a tapas bar. On Valentine’ Day, he comes into the flower shop (along with the rest of the last-minute herd of thoughtful guys) to buy some flowers for his flight attendant, sort-of girlfriend.

As luck would have it, Greg’s flygirl is shacking up with someone else. The free agent takes a shot at the five-date flower girl. Genevieve plays a little hard to get; she’s not easy and wants to be wooed and pursued. They go on dates (somehow they only manage to go out four times in three months). Maybe these are date-dates. Not the sort-of dates that pass by unrecorded. After date number four the clothes fly off.

You know the rest. He abides by the five-date rule. She realizes her system is as valid as a trying to use a library card to enter The Pentagon. She wants him back. He wants her, too. In the interim Genevieve faces-up to drama with her parents and finds that piece that she’d been missing the entire 80 minutes before the finale.

Since the 2002 box office sleeper hit My Big Fat Greek Wedding scored big across the board (even grabbing a short lived TV show series deal), the one-hitmaker Nia Vardalos has had a hard time wooing back her constituents. But not even the casting chemists could remedy this film’s troubles. It may be that Corbett and Vardalos had something special in their first walk down the aisle. Expecting the audience to buy into that connection again without enough substance or story makes their appearance together feel cheap. It’s like icing without cake.

The script is written as a wandering inner monologue by writer/director Vardalos, who seems so enamored with her own lines about relationships she ends up giving too much time to herself to shine on the turns of phrases. This tired structure where the guy and gal are lost and finally find each other, then fracture, then reemerge whole and stronger than ever—before the titles run—needs a widespread overhaul. There’s so much material to work off of and yet nothing novel. Not a layer beyond sea level. You can go home and tell your friends you saw I Hate Valentine’s Day in the same breath as bragging about the five stamps you licked for five different envelopes. It’s that riveting.