I Love You, Beth Cooper 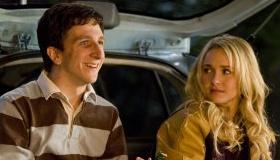 Director Chris Columbus’ new high school comedy is about a boy (Paul Rust) who uses his opportunity as class valedictorian to say the one thing he’s always wanted to say to the one girl (Hayden Panettiere) he never had the guts to say it to. I Love You, Beth Cooper poses an interesting question, but it’s a question that Columbus doesn’t seem to notice. Instead, this one time protégé of director John Hughes recycles a number of youth movie antics from the ’80’s, some of which he himself exploited in films he made during the 1980’s, including Adventures in Babysitting (1987) and Home Alone (1990). None of this dusty clowning has any place in a modern movie, whether it’s pandering to contemporary teenagers or former teenagers with delusional memories about their randy high school days. To that end, one is hard pressed to sort out the audience for this high school romp and doubts the box office will find one either.

The question is—what might happen if on the last day of school the class geek (aka: valedictorian) stood before the entire student body and faculty and told everyone what he thought of them—and then declared his love for the girl he’s been sitting behind in classes since middle-school? This is an interesting question and the film sets it up nicely before it goes on to ignore it completely. Answering this question might have provided any number of interesting directions for a film such as this, but the filmmakers behind I Love You, Beth Cooper preferred the insights gained when people fall out of windows, get punched by angry ex-boyfriends, hit by cars, step in cow poo, or have their underwear revealed for the most nonsensical of reasons. Most of these third rate gags are done badly at that. The fault here lies wholly with the writer, the producers and the director. The screenwriter, Larry Doyle, is adapting the script from his novel, the success of which is hard to imagine given the film’s dullness. Though one understands the desire to return to one’s roots, root rot is always a consideration. Here, not only has the material outgrown its relevance, the filmmakers are remembering it wrong. High school wasn't all that angsty or lusty for most of us.

In any case, all of that was once fodder for the high school comedies of the ’80's and even the ’90's, and that's where it should probably stay.