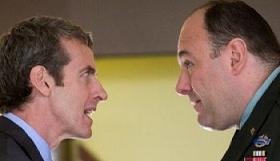 The problem with politics is that it’s run by politicians, people who may have been lured by the promise of doing good but who are eventually absorbed by (or destroyed by) its corrupt systems. In his uproariously funny motion picture debut, director Armando Iannucci takes both a pairing knife and a wrecking ball to the corridors of UK and US power, revealing government operators swallowed whole by the angles and alliances that need endless tending to maintain influence. It’s a venomous and incisive cinema exposé and it builds a relentless head of comic steam that never subsides. The half-Brit, half-Yankee cast is lead by Tom Hollander ( Pirates of the Caribbean II and III ) as a mid-level UK functionary whose one wrong word accelerates the call for war in the Middle East. This is smart, breakneck filmmaking of the type that probably won’t perform all that well domestically. But that says more about American audiences than it says about Iannucci’s comic gem.

In the Loop is a kind of big screen cousin to Iannucci’s 6-episode BBC series from 2007, The Thick of It. Like its TV progenitor, In the Loop is a script-improv combination of impressive density that features deep knowledge of political machinations. But what starts the ball rolling is a simple slip of the tongue by Simon Foster (Hollander), the UK Minister for International Development. During a pro-forma radio interview about diarrhea in the third world, Foster is asked if the US is gunning for war in the Middle East. His vague answer, that war is “unforeseeable,” incurs the bottomless wrath of the Prime Minister’s Director of Communications, Malcolm Tucker (Peter Capaldi, a vein-popping whirlwind), charged with downplaying media speculation about a war while also helping gather pro-war intelligence. In a film not lacking for vibrant characters, Tucker is a doozy, a concussion grenade filled with non-stop insults and vulgarities that would be downright uncomfortable if they weren’t so ferociously funny. He lights into Simon from their first meeting and the anti-war minister deserves it, because he’s so painfully out of his depth. But he acquires an ally in Toby (Chris Addison), his new political advisor. Toby’s college buddy is Liza (Anna Chlumsky), aide to the US Assistant Secretary for Diplomacy, Karen Clark (Mimi Kennedy). Liza has written a position paper claiming that the main source of Middle East intelligence is an unreliable drunk. The brief, which becomes important enough to be referred to by its acronym, figures decisively in the climactic UN vote to authorize the war.

With its waves of clever, sometimes profane dialogue and immersion in the absurdities of everyday political maneuverings, In the Loop is nothing less than a screwball tragedy, a hilarious satire that, sadly enough, may not be all that satirical. Simon is the closest we get to someone to believe in, if only because we can imagine similar bumbling if the walls started closing in on us. Yes, he does need to shut his trap (lest Malcolm punch Simon “into paralysis”), but one politico’s embarrassing flub is another’s patriotic slogan. That’s what happens when Simon compounds his original misstatement by explaining to the press that Britain must be prepared to “climb the mountain of conflict.” It’s a sentiment that’s framed and hung in the office of hawkish Asst. Secretary Linton Barwick (David Rasche), who has convened a secret War committee that Karen, Simon and the pacifist General Miller (James Gandolfini) are trying to infiltrate.

There’s so much going on and it all moves so fast that the movie’s sad, central point, that a war was authorized based on faulty intelligence, has to throw elbows to really register. But maybe that’s the idea. What drives everyone into fits of rage and panic is not fear of war but fear of unemployment. Liza, whose anti-war briefing paper ignores the winds that are blowing towards invasion, is in such hot water she’s “lobsterized.” Outwardly, Malcolm fears nothing, but his task of managing spin and pushing his boss’s agenda will lead him to acts that only those fearful of career beheading would ever attempt. As for sincere, puppy dog Simon, it’s all so overwhelming. After a brief misadventure in Washington DC, he can’t even do right by the Northampton locals (represented by Steve Coogan) who are angered that Simon’s office wall is about to collapse onto a neighborhood greenhouse. But only the most ruthless and power hungry can handle the white-hot tools needed for success on the world stage. Those left with their moral compasses intact are, like General Miller, relegated to using a little girl’s pink calculator to figure troop levels or, like Karen Clark, bleeding from the mouth during an important conference (about as apt a metaphor for political triple-talk as you’ll find). Nowadays, it’s become a viscously bi-partisan process on both sides of the Atlantic, and all we can hope from government is to remember the little people, vote with your conscience and, for God’s sake, “try not to annoy Russia.”