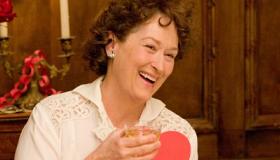 Whimsically interweaving the stories of Julie Powell, writer of the titular book Julie & Julia, and Julia Child (as taken from her book My Life in France ), Nora Ephron has built a feel good movie around two women with intersecting ambitions and similarly therapeutic relationships with food. While women seem the most immediate audience for this soufflé-light summer film, anyone with even fleeting interest in writing or in eating (a much larger demo, for sure) will want to revel in this two hour long celebration of love, life and Lobster Thermador.

The film begins in post-war France. Julia Child (Meryl Streep) and her husband Paul (Stanley Tucci) are stationed in Paris for a stint at the American Embassy there. The couple is into middle age but attack each other like young lovers as often as possible. In 2002, Julie Powell (Amy Adams) works as an administrator at a 9-11 support agency where she hears tales of tragedy and bureaucratic frustration by phone all day long. She consoles herself in her cooking nightly. Compared to her successful friends, one of them a journalist who softly claws at the wounds left by Julie’s unpublished novel (“Whatever happened to that book, huh?”), Julie is at sea. As a remedy, Julie’s husband Eric (Chris Messina) suggests she blog. The challenge is set: in one year she must test each of the 500-odd recipes in Child’s famed cookbook Mastering The Art of French Cooking. In the course of the film we watch each woman grow in her appropriate epoch: Julie develops greater cooking acumen and blog readership, while Julia studies at the Cordon Bleu and writes Mastering the Art of French Cooking with friends Simone Beck (Linda Emond) and Louisette Bertholle (Helen Carey). They struggle to publish their monster tome on cooking as Julie struggles with simultaneous anonymity and momentary celebrity. The two become the writers they aspire to be but not before a little narcissism (Julie), plenty of rejection (Julia) and a stiff lesson about living—not surviving—through the process.

Aesthetically, Ephron’s is always a nostalgic cinema, and the narrative parallels between the characters are as politically subtle as they are emotionally pointed. While Julia and Paul Child endure McCarthy, Julie and Eric Powell confront post 9-11 New York. Both are childless women, wives and writers, both were secretaries at government agencies and both were saved by food—or rather, the kind of lively abandon that goes with a dedication to good experiences, food chief among them. Food, in Julie & Julia, is something to savor, and while that seems predictable Ephron gives the matter an emphasis that feels meaningful, not obvious. These women aren’t just learning to cook; they’re putting body and soul into something that literally sustains them and their loved ones. As an art it’s oddly incongruent with the demands of modern life and it’s a sincere and worthy pleasure.