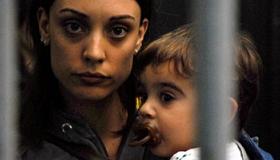 Joining artful camerawork as beautiful as anything from the New Latino Cinema and gripping melodrama with surprising realism, Argentinean filmmaker Pablo Trapero's female prison drama, Lion's Den ( Leonera ), has qualities that will attract enthusiastic word of mouth. Female audiences interested in the film's themes of motherhood in the most demanding conditions, as well as specialty audiences drawn to more challenging fare, will provide the Spanish-language drama with a select, core audience. With an unknown, Spanish cast (there's no Gael García Bernal in the movie, for example) and a director with little profile in the U.S., Lion's Den shows limited potential as an arthouse release and in home video for indie distributor Strand Releasing. Marketing that focuses on the feminist themes and draws comparisons to recent Spanish-language dramas like Fernando Meirelles' City of God and Bruno Barreto's Last Stop 174 will help promote the film to women and appreciative arthouse audiences.

In her apartment, Julia (Martina Gusman) wakes up after a night of excess to discover two men lying in their own blood. One of the men (Rodrigo Santoro) survives and testifies against Julia in court. Conviction for murder becomes just the first in a series of life-changing experiences for the hard-living Julia. She's also pregnant and destined to become a mother at an all-women's prison.

Trapero’s previous features Crane World (1999), El Bonaerense (2002), Rolling Family (2004) and Born and Bred (2006) received little attention in the U.S. Lion's Den is a smart, stunning breakout that will bring him much-deserved critical notice. Quality editing work from Trapero and Ezequiel Borovinsky keep the drama moving at a swift pace. This is an admirable achievement as the film shifts from a crime drama in its early scenes to a prison melodrama shortly thereafter. Cinematographer Guillermo Nieto makes artful use of the stark prison backdrop. The film's claustrophobic spaces, its jail cells and hallways are used to stunning effect. Production designer Coca Oderigo brings much appreciated authenticity to the film. Collaborating with writers Alejandro Fadel, Martín Mauregui and Santiago Mitre, Trapero supplies a story equal to the impressive technical work.

Martina Gusman is both sympathetic and slightly offensive as Julia, which makes her all the more believable as a woman not quite ready for motherhood. In prison, as the film shifts away from its opening crime sequence and settles into gritty melodrama, Gusman becomes more compelling. Her performance, especially in scenes when Julia bonds with her newborn son and develops relationships with her fellow inmates, is believable, grounded and appropriately intense.

Social message dramas like Lion's Den are difficult genres for any filmmaker, first-timer or veteran. While the film's feminist message is strong and compelling, its characters and storytelling provide the sociopolitical themes with ample dramatic support. Trapero, a native of Buenos Aires, deserves the lion's share of credit for the film's critical success.

Purchased by Strand after festival showings at Cannes and Toronto, Lion's Den may be the first step towards strong U.S. recognition in Trapero's directing career and a moderate home video success for a company with a strong track record of supporting challenging world cinema.