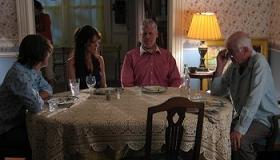 Artists interested in the film's debates about classic, representational art versus more avant-garde work will be disappointed by how simply Gallo represents the art of painting. Despite the presence of well-known cast members Ray Liotta, Armin Mueller-Stahl, Charles Durning and Samantha Mathis, Local Color has extremely limited potential in the specialty film market and will experience slightly larger audiences on DVD.

In small town New York circa 1974, teenager Johnny Talia (Morgan) convinces veteran painter Nicoli Seroff (Mueller-Stahl) to become his teacher and share all he knows about art. Johnny spends the summer at Seroff's house in rural Pennsylvania and while helping out with daily chores gains a mentor, a friend and the courage to become a professional artist.

Coming of age dramas like Local Color may be audience friendly but suffer by comparison to the many standout entries in the genre: Dead Poets Society and October Sky, among others. While the film's follow-your-dream message is inspiring, its characters and storytelling are superficial. Gallo, clearly inspired by his own story as a young painter in Mamaroneck, NY and his friendship with a Russian artist, fails to craft his sentimentality into something original and compelling. It's difficult to capture the glory of making art, whether painting or poetry, on film. While some standout filmmakers have succeeded, Robert Altman ( Vincent & Theo ) and Julian Schnabel ( Before Night Falls ) come to mind, Gallo, so woven into his own story, fails.

Armin Mueller-Stahl is believably colorful as Seroff, a short-tempered curmudgeon with an appetite for vodka. Mueller-Stahl is convincing, whether working in front of his easel or debating his work at the dinner table. The same is not true for Trevor Morgan, a veteran character actor at 22. Boyishly handsome with shaggy dark hair and a thin build, Morgan makes dull use of Johnny's naiveté and shyness. Morgan never brings Johnny alive and without an engaging student, the film's student/teacher drama collapses. Ray Liotta, in a minor role as Johnny's unsupportive father, trots out his wise guy personality in a performance that’s one-note at best. Charles Durning makes no impact as a frame shop owner who introduces Johnny to Seroff. Samantha Mathis, as Seroff's friendly neighbor, gives the most grounded performance in the film.

For Gallo, a longtime writer and director of hit Hollywood comedies, Local Color is a bold reminder that talent in one genre does not always transfer to another. Gallo has the skills for generating laughs. His ability to tug heartstrings remains up for debate. Cameraman Michael Negrin makes good use of the films' Louisiana locations. Unfortunately, clumsy narration and composer Chris Boardman's clumsier score emphasize all the trite aspects of the story.

Marketing campaigns that emphasize Mueller-Stahl and the film's student/teacher relationship will help generate audience support. Visual artists may also provide a small niche audience for the film. Still, despite modest box office potential, Local Color, shot in 2006, may be the start of a successful chapter in dramatic storytelling for Gallo. There's enough good about Local Color to award him additional chances.