close
Queens without the nuance 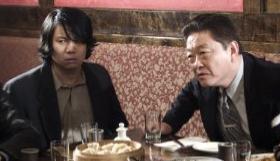 Off Jackson Avenue gets to brass tacks from the first frame and immediately intertwines three different characters’ plight along a sparsely populated industrial strip of Long Island City, Queens. So pressed to push plot, the filmmaker deserts little (big) things, like location attributes and character quirks. Much of the fodder is slippery pastiche, winking flirtations at elders who do gangster capers better and bolder. The work is still hinged on topping film school thesis benchmarks; not quite evolved enough to stream steady traffic to the theatres.

A bright-eyed, bushy-tailed Mexican woman named Olivia (Jessica Pimental) lands stateside to begin work as a waitress at a new restaurant. Driven home by a goon, she tries to sell her cooking acumen. Also arriving from the West—the far West—is a Japanese hit man named Tomo (Jun Suenaga), shuttled in a livery cab to Chinatown to rub out a kingpin’s Albanian pimp rival. And then there’s the car-thieving hotshot Joey (writer/director John-Luke Montias), who’s every cent from every boosted car is funneled toward a down payment on a tire shop and a chance at the square life.

The storylines get a good start out the gate but don’t finish with much of a gallop.

Olivia’s bait-and-switch dilemma comes to a head. That there’s no restaurant or even a dish to wash is a good tell. Or was it the half-dozen dolled-up girls in a waiting room? Soon enough, customers comprised of crooked cops and sleazebag johns all lay in on the new arrival. The Japanese hit man, Tomo, agrees to squeeze a couple hollow-point slugs into the pony-tailed pimp, Milot. A Chinese crime lord is infuriated by the brazen Albanian charging only $80 bucks a pop, thus compromising his “yum-yum houses.” Tomo, who claims to be an English teacher back in Asia, is haunted by thoughts of his dying mother. The two talk over the phone and not long into the film she dies. Meantime, a determined car thief is pulling sedans left and right. Cash in hand, he makes numerous stops to a tire shop to deposit funds in hopes of getting the keys to the joint in a matter of days.

The attempt to create a brilliant dénouement at the end where all three characters intersect is nice, but also blatantly predictable. Despite this, there are some glints of surprise. Tomo delays offing the pimp to get a bite to eat at a fast food joint and, at another point, just before he pulls the trigger his dead mother replaces his target and spooks him silly. Also, the bordello is not so smooth running. When Olivia hurls in the toilet after her first day as a “hostess” the toilet fails to flush.

The filmmaker’s tossing a lot at the viewer. While all the characters’ lives are in disarray there’s a deal going on with mobsters and a Wall Street CEO involving a scheme to funnel money. There’s Joey’s uncle, who’s fed-up with feeling useless and wants to go the Florida relocation route. John-Luke Montias may be trying knot three movies into one, but he’s too clever for his own good. He could have dropped one of the plots—probably the car-thieving one in which he casts himself—and focused on the tourist-turned-tramp and the assassin-gone-pacifist. Instead he piles heaps on the plate and expects everybody to stomach the heavy load.

Off Jackson Avenue (originally titled: Jackson Avenue Hustle ) attempts to make a New York story on the fringes of the waterfront of what was NYC’s industrial sector. Most of the warehouses and factories are abandoned or converted to condos. The character of the place is not even touched on. The filmmaker is too confident and misses critical details. Nevertheless, the chaos in this quiet section of town is supposed to suggest that it’s only in New York that all these uncanny tropes could occur simultaneously. Maybe. But the execution is debased, despite the gritty, grainy 16mm stock footage. Frankly, the same story could have taken place in Juneau, Alaska and not made a dent of difference.

For his part, the script isn’t bad. The filmmaker (a former bartender) clearly eavesdropped enough to write like people talk. But in terms of structure and intricate plotting, the film is in over its head. For a sophomore effort, the works is just that—sophomoric. If I want a movie about a slice of New York I could go to my nearest pizzeria and purchase a plain slice and be just as content.