close
Not a sturdy mooring in realism… 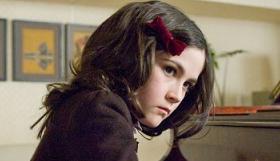 This kitschy horror item about a nice suburban couple with two kids whose adoption of an orphaned Russian child turns out to be a not-so-hot move has enough kinky Grand Guignol moments and scenes of sheer terror to make a quick killing at the box office—even though it borrows from just about every other Bad Seed flick Hollywood has ever unleashed. Expect strong business from teen girls and good word of mouth for a solid twist no one will see coming.

Hatched from producer Joel Silver’s production company, Dark Castle Film, which was originally designed as a haven for contemporary knockoffs of old cheesy horror films ( House On Haunted Hill, Thir13en Ghosts ), David Leslie Johnson’s screenplay has its frights initially grounded in reality. The film’s central couple Kate (Vera Farmiga) and John (Peter Sarsgaard)—apparently no intended relation to notoriously estranged reality TV stars Jon and Kate—experience the devastating loss of their unborn child and turn to a catholic orphanage to heal their wounds. When the nun (CCH Pounder) comes up with a Russian girl named Esther (Isabelle Fuhrman) they jump at the chance and bring her home to their other kids, Daniel (Jimmy Bennett) and their deaf younger daughter Max (Aryana Engineer). Anyone with a knowledge of films ranging from The Bad Seed to The Good Son can figure out it won’t be long before this strange and mysterious newcomer starts wreaking havoc, even though the parents think she’s an angel and remain clueless about what’s going on. One by one the kids, and finally Mom, see Esther’s behavior could be signaling that this little “angel” may be the devil incarnate. Questions about the girl’s sketchy past continue until a rather startling twist sets events in motion for a truly terrifying final act.

Although director Jaume Collet-Serra ( House Of Wax ) is firmly in control, some of the script’s sharp turns defy credibility, particularly a bizarre and awkward seduction sequence between Dad and Esther that you’ll have to see to believe. The psychological underpinnings of Johnson’s wild plot (from a story by Alex Mace) fortunately lend a welcome dose of reality to the proceedings and set up a wild denouement.

To pull all the operatics off, producers have wisely cast solid pros Sarsgaard and Farmiga, who bring real dimensions to a couple reeling from one tragedy and about to experience another. Farmiga is particularly fine as the mother of a devil-child, something she’s had cinematic experience with previously in 2007’s similar demon-youth movie, Joshua. Perhaps this actress ought to consider something other than parenting in her future films. The real find is young Fuhrman who may have the trickiest role a child actor has had to pull off since Linda Blair battled The Exorcist in 1973. Engineer, a hearing impaired young actress is also outstanding as the very deaf younger daughter. Engineer shows a strong knack for sign language, an unusual touch in a genre picture like this.

Some Pro-adoption groups have complained to Warner Bros about the negative light Orphan potentially shines on adoptions and have urged a boycott. Although the studio has promised to put a positive message on the DVD release, it’s unlikely that there are many real ‘Esthers’ out there looking for a home. At least we hope so.