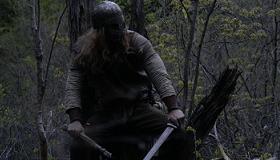 Despite the rocking Judas Priest soundtrack—or maybe, with help from it—29 year old writer/director/actor Tony Stone's extremely low budget epic might be the closest a movie has ever come to capturing the joie de Viking. According to the Vinland Sagas, in 1007 the men of Leif Ericson fled Vinland (present day Newfoundland) after a deadly ambush from the native Abenaki Indians. They left two scouts for dead. This is an aside in the history that Stone expands into a feature length film, which is largely comprised of he and his friends tramping around his family's corner of a Vermont forest. An engrossing curiosity of bludgeoning patience, blunt violence and sly humor, its commercial appeal is modest, but more than enough to make it worth the while for Stone and the audience that dares to explore.

Settling the New World is hard. Building a cabin, for example, takes two Irish monks (David Perry and Sean Dooley) working sweaty days chopping and stacking wood—effort and time the film makes us feel axe thwack by axe thwack. But being Viking is pretty awesome. When Orn (Stone) and Volnard (Fiore Tedesco) come across the monks—the first humans they've seen in ages—they break into an immediate full sprint with swords set to kill. Later, they burn that hard-built cabin in a scene that seems less about berserker rage than the unspoken duty to be a badass. Everything here takes time. The endless scenes of chopping trees and building fires are as much part of the struggle to survive as the brief and fatal fights with the native Abenaki. And in case you doubt the energy spent, we're treated to long sequences of the men trying to feed themselves: from making spears to stabbing fish to roasting fish to, yes, excreting fish. That and a brutal scene with a chicken make Severed Ways the survivalist counterpart to John Waters' Pink Flamingos.

But there's a dark, offhand undercurrent of humor alongside the heavy-duty naturalism. The Vikings rarely speak, but when they do the subtitles read like street corner bros. "We're toast if we stay here," says one, and later, "This fish is really killer." The flick is divided up into chapters with blaring red titles like "Stranded" and "Conquest" (one introduced with Orn headbanging in the background). But then Stone plays with his formula by announcing chapters that end before we knew they ever began. We can't help but think this entire film is a prank. The shaky handheld footage that puts us in Viking POV feels immediate and primitive, but it's nearly unwatchable, then Stone pulls back and proves that he can compose a shot—he just doesn't always want to. That he concocted and nearly pulls off this gruff, truly indie flick, maintaining our interest—mostly—through slow, wordless curio makes him a director to watch, even if to go berseker for it you'd have to enter the theater under the influence of bog myrtle.