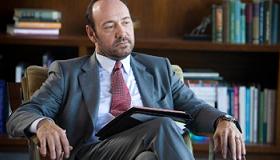 A well intended update to the semi-established therapist dramedy genre, Shrink features Kevin Spacey as a wounded psychiatrist who, like all the wayward souls we meet in the movie’s Los Angeles, suffers from a psycho-spiritual stuckness. This doctor can’t practice the old adage “physician heal thyself” and so self-medicates with copious amounts of pot. Prospects for this limited release aren’t threateningly slim given the name cast, but the storylines provide as many facile conclusions as moments of wry humor so longevity on this title is unlikely. Film should provide a good stepping stone for writer Thomas Moffett ( Frost: The Last Playboy ) and director Jonas Pate (TV’s Chuck and Friday Night Lights ), whose careers should do anything but Shrink after this film finishes its theatrical run.

Jemma, the world-weary teen played by a luminous Keke Palmer, deflates Henry Carter (Spacey) and his pop psychobabble by saying, “I know. I saw Ordinary People.” Typically surrounded by high paying clientele, this therapist to the stars deals with either manic, self-absorbed agents (a great Dallas Roberts) or megastars with spiritual malaise. Jemma is a pro-bono project handed down by Henry’s therapist father (Robert Loggia) to remind him he can help people. A year ago Henry’s wife committed suicide, as did Jemma’s mother. While Henry retreated into a 420 cloud, Jemma let her grades slide (she’s in high school) and began skipping class to go to the movies. As Henry works to earn Jemma’s trust, Henry’s friend and family member, Jeremy (Mark Webber), struggles to write a screenplay worth making. Each morning he reads a quote by Norman Mailer that he’s taped to his bathroom mirror: ‘we shrink from our purpose.’ When Jeremy finds Jemma’s file outside of Henry’s office he becomes fixated with her and tries to befriend herand then writes a screenplay about her without her knowledge or permission. By the magic of Hollywood, fences are mended.

Dramedies, like dark comedies, are always built on the tension between serious subjects and comic tone, and that’s a tough mixture to manage. In the case of Shrink, the climactic troubles are less serious than the other travails and that makes the shifts in tone feel more obvious and less meaningful. The notion that people shrink—when they’re wounded, confused, overwhelmed, underappreciated, overworked or surrounded by a culture that’s been spiritually bleached—is a viable descriptor for every character in the film, but no solution is available for any of the characters and the problems they face are never explored in any useful light. Hollywood bows tie up every conflict. The film’s Los Angeles setting reduces each character to either a smart guy movie watcher or a shallow, exploitative moviemaker. Formally, the film exhibits skill, but as a project, Shrink may leave you cold.