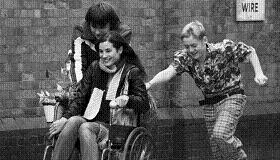 This teen drama was made on a micro-budget by the much-acclaimed British filmmaker from Nottingham, Shane Meadows. Here he eschews his usual Midlands habitat to concentrate on the area around London’s St. Pancras Station, home to the new and gleaming Eurostar train terminal. His two protagonists are propelled towards the bright lights of the big city by circumstance and curiosity. It holds touching and gritty rewards for those who take the trouble to seek it out.
Shane Meadows's last feature, This is England, won him heaps of praise and a British Academy of Film and Television Arts (BAFTA) award for Best British Film of last year.
So how do you follow that? Team up again with the youthful revelation of the previous title, Thomas Turgoose (playing Tomo) and pair him with Marek (played by a Polish unknown Piotr Jagiello) as two hopefuls in the big city.
The title refers to the area of London around St. Pancras where the new Eurostar terminal was taking shape at the time of shooting. The Polish youngster is bored as father’s work on the terminal preoccupies him. As kindred spirits the two lads hook up and Tomo even moves in secretly to the apartment Marek shares with his father.
Soon the two of them concoct a whole series of adventures to fill their days, such as hiring out deck chairs to a neighbor, wooing a girl who works at a local café—and drowning their sorrows together when she leaves.
It is crisply and economically shot in black and white and recalls something of French master François Truffaut’s iconic debut film The 400 Blows as it examines the bonds of friendship and family ties.
It may seem slight but Meadows is a master of the art of revealing human foibles and weaknesses, which means the film lingers long after its extremely modest running time. A wee gem.