close
A rocumentary with muscle. 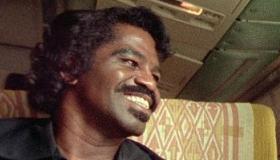 Producer/director Jeffrey Levy-Hinte nursed a dream for over a dozen years, ever since he joined Leon Gast, Taylor Hackford and Keith Robinson in editing When We Were Kings, Gast's Oscar-winning 1996 documentary about the 1974 Zaire heavyweight title fight between George Foreman and Muhammad Ali. Traditionally, a film's leftover footage ends up back in the vault (although these days it is as just as likely to end up on a DVD as bonus material). But when Levy-Hinte came across footage from Zaire '74, a three-day music festival originally meant to accompany the bout; he knew there was another movie to be made. The result is Soul Power, a fascinating vérité look back at an extraordinary weekend that ought to capture its own share of awards buzz along with moderate box office success, thanks to its strong appeal to doc and music fans.

Levy-Hinte gets right to the heart of the matter, opening with a buoyant James Brown and his Mighty JBs performing the titular "Soul Power." In his early 40s, the Godfather of Soul is still athletic enough to nail his trademark splits and on this night he is on fire. But that performance is just a taste of what is to come, as the movie then steps back to set up the groundwork of the event. Designed to complement the upcoming "Rumble in the Jungle," the concert was also an expression of Black Power, and promoters Hugh Masekela, Stewart Levine and Lloyd Price gathered together a heavyweight assortment of talent that included in addition to Brown, such stars as B.B. King, The Spinners, singer Bill Withers, Miriam Makeba, The Crusaders and Celia Cruz and the Fania All-Stars.

The doc is all-encompassing, limning the build up to the festival in both the U.S. and Kinshasa. The behind the scenes record of the event is fascinating, both in terms of the mechanics of successfully creating such a massive enterprise and in the personalities involved. Ali is not part of the show, but he is always around, at one point flatly revealing his own views of race relations. Noting the American history of slavery and lynchings, he observes, "We white and blacks are not brothers. I'm the world's greatest fighter. Otherwise, I'd just be another Negro."

But the politics of the event soon give way to the music, which is both Soul Power 's strength and weakness. Every single act is in top form and some of the highlights include an exuberant Makeba singing "The Click Song" and smoking hot King performing "The Thrill is Gone." The downside is only Brown, who closes the show with an incendiary "Say It Loud (I'm Black and I'm Proud)," gets any prolonged screen time. The others get a song and then they're gone. Granted, Levy-Hinte clearly did not mean to make an epic, but the film leaves you wanting more.

Soul Power also raises questions it never answers, thanks to Levy-Hinte's decision to only use footage from 1974 with no new interviews to put the events of Zaire ’74 into context. That does not detract from the movie's entertainment value, but for moviegoers who may not even have been born in 1974 it does leave some blanks that it would be nice to fill. As a document of a once in a lifetime event, Soul Power delivers sensationally but it never feels complete. Perhaps that is something for the eventual DVD.