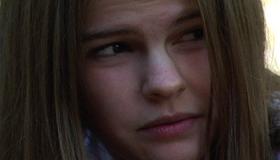 Girl empowerment is the underlying theme of this ill-conceived Canadian thrillerette about four 14 year old girls stranded in the wilderness with their a guide, who, as it happens, is the older brother of the central protagonist. Alysha (Alysha Aubin) lost her father some time earlier in a river accident that left her afraid of the water. Though this is true, the four young girls still embark on completely unnecessary rafting journey, and for their trip they choose to raft in a wilderness where no one will find them if they die. This is not only a bad idea for a movie; it’s a use of your funds no one should advise. Numbers will be (necessarily) slim.

Mean Creek, River’s Edge, Stand by Me and even Brick come to mind as models of good films from this unique mode of coming of age drama. The kind where there’s a dead body somewhere and the one sensible thing that the characters can do in such a circumstance—find an adult—isn’t possible. Of course the trick of these films is to put a rationale adult authority figure out of reach of the precocious kids. Here, the three writer/directors (Sascha Drews, Matthew Miller and Ezra Krybus) put the potential parental authority in the movie and then kill him. Thus, they cleverly leave the girls all alone with the dead adult and the question of what to do next. Our protagonist insists on bringing her dead brother back to civilization with them as part of a self-imposed trauma therapy, which she explains among other things in an on-going voiceover that gives the plot away in the first scene (if one is paying attention).

The thing that Surviving Crooked Lake doesn’t have that most of the previously mentioned and similarly themed movies did, is a coherent plot and decent acting. These girls are cute, they all have a willowy presence and purposefully youthful sensuality, but they are novice actors and it shows. This is a shallow criticism on our part; the young thespians will get better. On the other hand, the three writer/directors at work here are more dubious. With that many people in the writer/director’s chair, one would expect at least a plausible plot and reasonably believable dialogue—not so.