close
A great turn by the under-rated Jeff Daniels 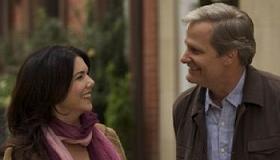 For those seeking smart, sharp, witty, indie filmmaking here’s your answer. Jeff Daniels is outstanding playing a reclusive self help author of spiritual books in this slight but satisfying comedy that premiered at this year’s Sundance under the title, Arlen Faber. Now picked up by Magnolia, its prospects of making much of a dent at the Summer box office are limited, but word of mouth should guarantee a decent play followed by a devoted cult who will discover its virtues later on DVD.

Daniels is at his crotchety best as Arlen Faber, a guy who wrote a book in which he claimed to have conversations with God. Translated into 100 languages the tome is still a wildly popular best seller even after 20 years but its success has thrown Faber into a life of seclusion and bitterness. Just as he is still known as the man with all the answers his reclusive lifestyle is suddenly turned on its head when he can’t avoid Elizabeth (Lauren Graham), a single mom and Kris (Lou Taylor Pucci) a recovering addict, both of whom are searching for the kind of meaning in their lives that Faber is supposed to be capable of providing. Of course, anyone with a degree in screenwriting 101 will be able to tell you this is a man who is devoid of any answers, especially for himself.

Answer Man may be an inferior title to the earlier title, but as a film it’s a breath of fresh air under any name, a terrific entertainment that’s sparkling and wickedly funny. A debut feature from 40 year old stand up comic John Hindman, who wrote and directed, the movie feels like the kind of thing someone with a lot of pent-up issues writes as therapy. The best reason to see it though is Daniels who seems to be in every other movie these days, as well as on Broadway in the Tony winning God Of Carnage. One of Hollywood’s perpetually underrated actors, its nice to see Daniels get his due in the indie world where his talents are being put to good use. As Faber, he nails a guy who is the polar opposite of the success story he should be. Daniels knows how to get lots of comic mileage out of physical maladies, particularly a bad back that makes him practically immobile at times. Great stuff. Of course you can’t hang a movie on an unlikeable oaf who can’t pick himself off the floor, so thank God for Lauren Graham as the chiropractor who lights up his life and provides the perfect romantic interest to turn things around for Faber. Pucci is also well cast as the young man who won’t take “no” for an answer from the “Answer Man.” Olivia Thirby and Kat Dennings make good impressions in lesser roles, while Nora Dunn is a riot as Faber’s pushy agent.

In a different indie environment The Answer Man would have genuine sleeper potential, but it may be too simple-minded to survive long in theatres. Still, it’s definitely worth a look.